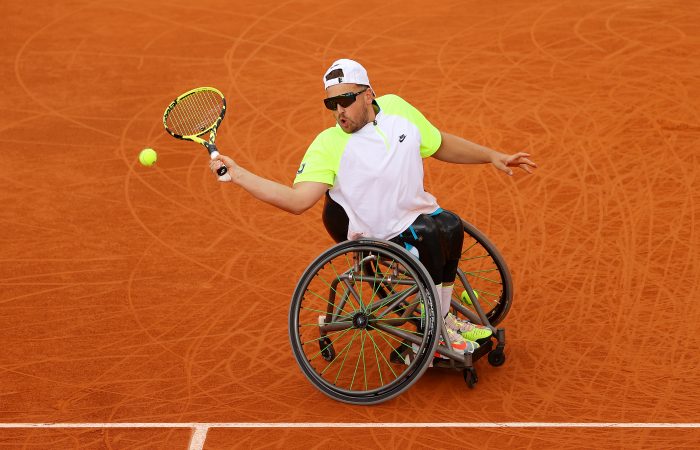 The world No.1-ranked Alcott defended his title with an impressive 6-2 6-2 victory over Brit Andy Lapthorne in today’s final.

Alcott made a slow start, losing the opening two games of the match. But the 29-year-old from Melbourne soon found his range, reeling off six consecutive games to take the first set.

Lapthorne proved why he’s the world No.2, putting up a fight early in the second set. There was no curbing Alcott’s momentum though, with the Australian sealing victory with a drop shot winner after 51 minutes on court.

“It’s been obviously such a crazy year,” Alcott said. “For Roland Garros to even get up is pretty awesome, let alone wheelchair tennis, put on the main court today for the first time. As soon as I saw that, I had a spring in my step, to be honest. I like a big, big occasion.”

Alcott is now one of only three Australians to defend a Roland Garros title during the Open era, with Margaret Court the first when she won consecutive women’s singles crowns in 1969-70.

It is Alcott’s fourth Grand Slam title of the 2020 season. He scooped the Australian Open singles and doubles titles, as well as winning the US Open doubles last month.

“I love winning Grand Slams, but it’s not the reason I get out of bed. It’s not. It’s to provide opportunities and to try and change perceptions,” Alcott said.

“I feel privileged to play it, I really do. I love it. I just want to build the sport so when I retire, the next generation of kids can get sponsors, they can afford to come, can afford to buy a wheelchair. People do watch them. That’s what I want to try and do.”

We did it!! @rolandgarros champion!!! 11 game slams. Can’t believe it. Paris we love you. Big love to my team and all of you who tuned in and sent messages of love and support. You all continue to make my dreams possible. Tres bloody bien 💪🏼👐🏼🇫🇷🔥❤️ #rolandgarros pic.twitter.com/IDQzh837yV