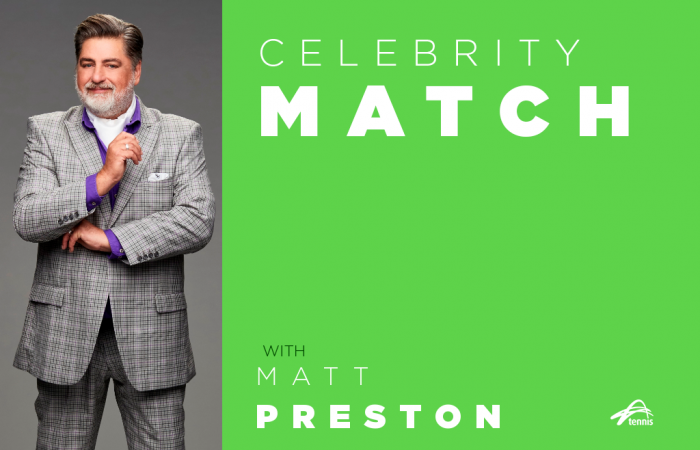 Matt Preston is an award-winning food journalist and television personality. The author of seven best-selling cookbooks, the English-born Australian was a judge and co-host on Masterchef Australia for 11 years. Preston’s next television role is as a judge on Plate of Origin, which premieres on Channel Seven tomorrow night.

In our Celebrity Match series, Preston reveals he is a life-long tennis player with a mean sliced backhand …

I’ve played tennis since I was a kid. I’m a member of a small club and played in a team of four every Monday night for 16 years before TV filming started to get in the way.

There’s no finer shot than a ripped top-spin backhand down the line … when they come off – which isn’t all that often for me! My most consistent shot is probably a viciously undercut sliced backhand that veers back towards the net after landing. It’s underhanded in more ways than one.

I have so many! The epic and emotional Jim Courier and Pete Sampras five-setter at Australian Open 1995 is one – and Courier backing up by playing drums with R.E.M. at the Sidney Myer Music Bowl the next night. Another is teaming with Alicia Molik in a December Showdown Pro-Am at Melbourne Park in 2010 to beat Dave Hughes and Anastasia Rodionova. We were definitely the underdogs – Roddy had recently won her gold medal at the Commonwealth Games and Hughesy is mildly fanatical about his tennis.
But best was probably Lleyton Hewitt’s Davis Cup win over Roger Federer at Melbourne Park in 2003. Federer was just two points away from closing out the match, Hewitt hadn’t taken a set and I remember turning to my mate and saying, ‘if he gets out of this, it might be tennis’ great comeback’. He did – and it was!

It would have been Centre Court at Wimbledon, but I have no clear memory of who played. Even though I grew up in West London, I seldom went. It was just such a palaver getting tickets. I remember being shocked when I first bought tickets for the Australian Open here and that you could buy pretty much whatever you wanted. It was such a treat! I have gone to the Australian Open most years since 1994. It’s one of the great things about Melbourne. Another is being able to play on the same courts that the pros use. The first match I watched at the Australian Open featured Lindsay Davenport, who had just won the Brisbane title, on an outside court.

I love Andy Murray for the very visual constant inner turmoil and the way he plays. Roger Federer is a beautiful player and Nick Kyrgios is fun to watch – and an interesting character, who increasingly recently I have got a lot of time for. And who doesn’t love Ash Barty as a player and a person. The woman is a dead-set legend. Overseas, the whole family are huge Alison Riske fans.

Right now during lockdown, I’d pick having a hit with the Rodionova sisters or Alicia Molik. Although Arina and Anastasia are always very rude about how awful my tennis style is, their ruthless honesty is part of the reason I love them. Alicia, however, is one of the nicest people you could ever meet or hit with.

The best part of the Australian Open is … that it’s in Melbourne and you get to see the greats in the best surroundings – as well as catch the soon-to-be-greats on the outer courts. I still remember watching Lindsay Davenport in one of the first times she played here – I reckon it was on court 14 or 15.

Tennis is fun …
a) because everyone can play.
b) because it is amazing to watch the best in the world play a sport you love and aren’t very good at.
c) unless you are playing my highly-competitive 16-year-old son, who takes the greatest pleasure on beating his old Dad.