To mark one year to go until the rescheduled 2020 Paralympic Games in Tokyo, we celebrate the growing influence of three-time gold medallist Dylan Alcott. 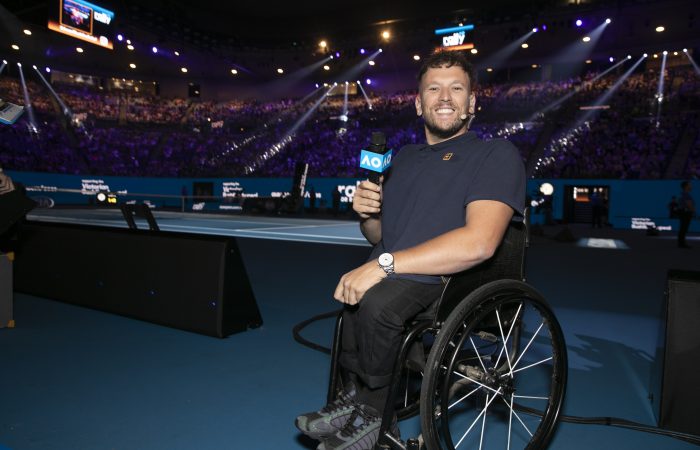 As the world’s No.1-ranked quad wheelchair player, Dylan Alcott has a pronounced on-court influence. He is, after all, a 10-time Grand Slam singles champion who boasts a 29-1 win-loss record from his past 10 tournaments.

The 29-year-old from Melbourne is also a passionate and vocal advocate for inclusion – and as his profile soars, so does his impact in the tennis community and beyond.

“I love winning Grand Slams – but I love what it does for me more, which is gives me that platform and voice to be able to do that,” he admitted.

Alcott proved this in June when he berated the US Open for excluding wheelchair events from its 2020 tournament schedule. He labelled it “disgusting discrimination” in a series of tweets that went viral and drew high-profile support from peers including Roger Federer, Novak Djokovic, Andy Murray and Kim Clijsters.

Just got announced that the US Open will go ahead WITHOUT wheelchair tennis.. Players weren’t consulted. I thought I did enough to qualify – 2x champion, number 1 in the world. But unfortunately I missed the only thing that mattered, being able to walk. Disgusting discrimination

Alcott’s views made worldwide headlines and the reaction led to the tournament reinstating wheelchair events for 2020.

“It’s a huge turning point to show how supportive a community can be and from the bottom of my heart, I can’t say thanks enough,” Alcott said when the decision was reversed.

In a frank discussion with fellow Paralympian Kurt Fearnley on the ABC’s One Plus One last month, Alcott related his ongoing frustrations of inequality.

“I got discriminated (against) on a plane last year when they wouldn’t let me on because it was too windy. They got a security guard to escort me off.

“Even though we’re the lucky Paralympians and people might know (who we are), we’re also people with a disability who face that discrimination day-to-day as well.

“If it happens to us, imagine what’s happening to everyone else where they don’t have a voice. And that breaks my heart.”

Alcott, who was born with a tumour around his spine and left a paraplegic after surgery to remove it, is using his growing profile to support those with a disability.

He has established the Dylan Alcott Foundation to help young Australians with a disability to build self-esteem and organised Ability Fest, a Melbourne music festival with a focus on inclusion. He also founded Get Skilled Access, a company that reshapes workplace behaviours and attitudes towards disability.

“I love my career and what I do, but I also love what I do outside of sport,” Alcott said. “My work in the media, the work with the Dylan Alcott Foundation and trying to build capacity for people with a disability to get out there and live the life that they want.”

Earlier this year, Alcott and his sponsors contributed $40,000 to bushfire relief efforts to support impacted disabled Australians. He also launched a new podcast called ListenABLE, which aims to break down stigmas around disabilities.

Alcott’s determination to make a difference stems from his own experiences of extensive bullying.

“For about two years I sat at home too embarrassed to leave the house,” he relates of his teenage years.

No longer shy or ashamed, Alcott has blossomed into one of Australia’s most influential athletes.

“That is the biggest thing that sport has given me – belonging into a community, but also being proud of who I was,” he explained.

As Alcott continues to score wins both on and off the court, he is proving that disability is no barrier to success.

His sights are still firmly set on the rescheduled Paralympic Games in Tokyo next August, where he is hoping to represent Australia for a fourth time. Alcott is the defending gold medallist in quad wheelchair singles and doubles.

Same goal. Different date. Hard work won’t stop. Bring on 2021.
Thanks to everyone for their beautiful messages. I c them all and appreciate it. My heart goes out to everyone around the world who are facing unprecedented health and financial risks. Love to you and your families pic.twitter.com/25YGYU2OGd

“It was tough when the news came that the coronavirus pandemic was going to delay the Paralympic Games,” Alcott said.

“I’m not going to lie, it was a bummer. But I then drive down the street and see people lining up at Centrelink, I see people in hospital who are sick, and people around the world who have had much bigger losses than I have – which means training for another year to go to the Paralympics. It’s all about that perspective.”

His next challenge is the US Open, which begins on 10 September. Alcott is aiming to win his third title in New York, where he was the champion in 2015 and 2018. It will mark Alcott’s first professional appearance since March and in now having the opportunity to compete, another major victory in his ongoing quest for equality.