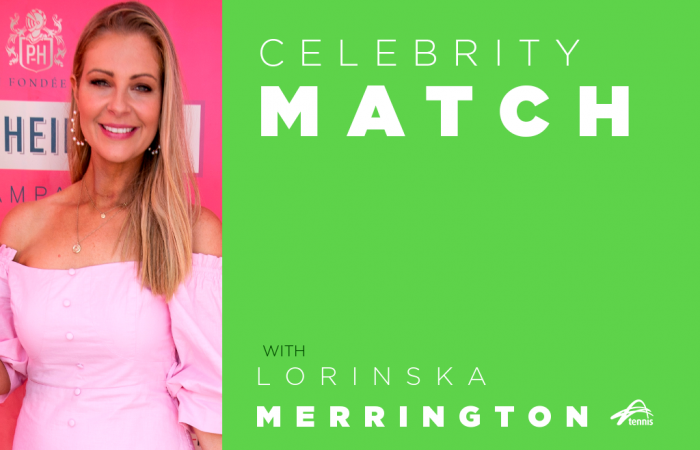 Lorinska Merrington is an Australian television personality who stars on Yummy Mummies, a reality show that has become a worldwide Netflix favourite. A qualified primary school teacher, Merrington also works as an event host and brand collaborator.

In our Celebrity Match series, Merrington reveals her life-long love of tennis …

Yes, I have and I absolutely LOVE IT! I started playing when I was a little youngster. I don’t think I was really good at it, and I’m not really good at it now, but I play weekly and love it.
I can honestly say I get the best workouts playing tennis too. Sometimes I’m shocked with how many kilometres you run around the court compared to going for a run.

I love a good overhead smash and when it connects, even better.

My earliest memory of tennis was when mum and dad bought my brother and I racquets and tennis balls and we would play up against the side of the house. I remember dad repeatedly asking my brother and I to “bang the ball against the other side of the house”.
Soon my parents bought us (and it’s still in dad’s shed) the Orbit Original Tennis Pole – yes, I still remember the name! It had a rotating swivel, with a tennis ball attached to the string and we would hit that ball after school and on the weekends all day long.

I do, I have many. For me, tennis reminds me of the summer holidays being in full swing and watching the Australian Open on television then going outside in the yard to try and mimic those shots you saw advertised or watching the game. I also can recall grazed knees and elbows – mum was always bringing out icy cold water with watermelon. They are the best memories, I can almost smell the cut grass.

Oh goodness, you got me stumped here. I can’t remember – but I do remember watching Roger Federer and Rafael Nadal. That was absolutely incredible.

Roger Federer and Serena Williams, they seem like incredible people on and off the court.

Serena Williams, hands down. You don’t have to love tennis to love Serena Williams. She is an inspiration to all. Yes, she’s an accomplished athlete and all the rest of it regarding her tennis, but also a passionate philanthropist, sister, daughter, mother, wife, and role model.

The best part of the Australian Open is … to see the world’s best tennis players in the world flock to Melbourne each January to battle it out for the major title.

Tennis is fun because … it’s a great workout, very social, played everywhere, and you can play it forever.