There's much to celebrate as Australian legend Rod Laver celebrates his 82nd birthday – including a powerful professional turning point, more than 50 years ago. 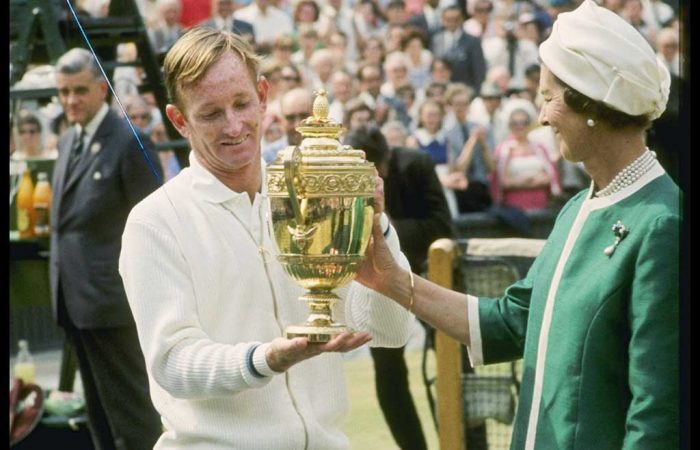 To choose just one moment to celebrate in Rod Laver’s glorious career is near impossible. The Rockhampton-born “Rocket” is, after all, feted as the winner of an unmatched 200 tournaments, and twice a winner of the coveted calendar-year Grand Slam.

Even eras can compete for celebratory honours, Laver concluding his amateur career after featuring in Australia’s 1962 Davis Cup victory. It was the same year that the then 24-year-old Laver completed his first sweep of the majors, an honour he replicated as a professional seven years later.

But if there’s a single event that stands out as Laver celebrates his 82nd birthday, it’s perhaps 1968 Wimbledon. Only the second Grand Slam of the Open era, it was the first major singles title that Laver would claim as a professional.

“Amateurs and pros were rubbing shoulders on Wimbledon’s historic courts,” Laver writes of his competitive return to the All England Club in Rod Laver: A Memoir. “It was an amnesty ceremony as much as a tennis tournament.”

While already a two-time gentleman singles champion, there was immense pleasure in simply contesting The Championships after a five-year hiatus.

As Laver himself describes it, “that Wimbledon was a splendid reunion for all the ostracised professionals.”

Weeks earlier, Laver was runner-up to countryman Rosewall at the first “open” French Open. At Wimbledon, he defeated a Brit and five Americans (including Arthur Ashe in the semifinals) before facing another Australian, Tony Roche, in the final.

“We were both keen to get our hands on not just the famed trophy but the £2000 winner’s prize money,” wrote Laver, who withstood an early challenge from his 23-year-old countryman to claim a 6-3 6-4 6-2 victory.

“As I was handed the silverware after the match, I had a sense of déjà vu. Although I’d been in the professional wilderness for five years, in some ways I had never really been away.”

If there was a sense of what-might-have-been for Laver, who was in fact absent from 21 major events after his decision to turn professional, there was also a powerful turning point for the much-loved champion.

Laver lifted singles trophies at five of the first seven majors contested in the Open era, including his second calendar-year Grand Slam in 1969 as a 31-year-old.

More than half a century later, Laver remains the only player to twice win all four Grand Slams in a season and is both the benchmark and the inspiration for the many greats who have followed.

Roger Federer is arguably most prominent among that group and a driving force behind the Laver Cup that was created in the Australian’s honour.

While helping Team Europe claim three victories in three instalments of the innovative tournament, the Swiss star has repeatedly acknowledged the tremendous path that Laver and his contemporaries established.

“You should honour the great players of our sport, that we can earn a living, live our dream and we’ll try hard to represent the sport of the game,” said Federer as he accepted the inaugural trophy for Team Europe in 2017.

When Laver claimed one of many memorable triumphs at Wimbledon, it was with stellar professional and personal qualities that still resonate more than five decades later.