Comedian and television personality Nazeem Hussain reveals why he loves tennis in our Celebrity Match series. 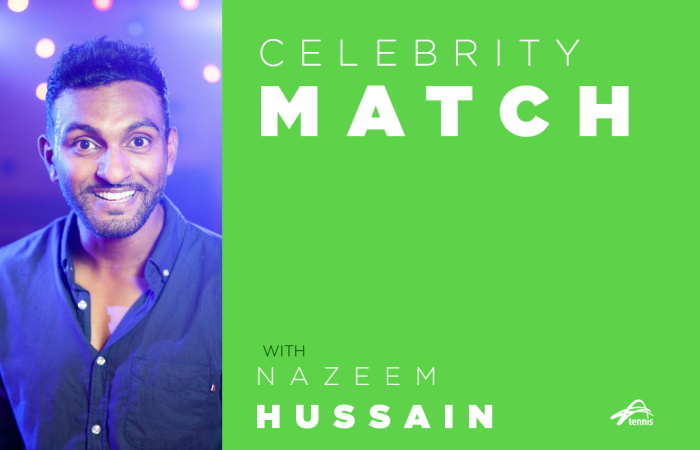 Nazeem Hussain is a comedian and television personality. He has performed across the world as a stand-up comedian and his Nazeem Hussain: Public Frenemy show, filmed in Montreal at the Just For Laughs Festival last year, streamed globally on Netflix. He also created and starred in the sketch comedy television series Orange Is The New Brown and made the final four in the 2017 season of I’m A Celebrity … Get Me Out of Here!

In our Celebrity Match series, Hussain reveals why tennis is his favourite sport …

I used to play when I was a kid at Burwood Tennis Club in Melbourne. I was pretty average to be honest. I remember so many of my shots ended up flying out onto Warragil Road and I’d hear cars tooting as they dodged balls.

What was your best shot?

Apparently, I had a really good serve. I used to watch a lot of tennis and I’d try to serve like Pete Sampras. I used to hit my serve – accidentally – with topspin, which impressed the coaches at my club. They would often make me serve again to show the other kids. My serves rarely went in, but my style impressed them. I used to like playing at the net as well and trash talking my opponents. I’m not sure if that’s the right tennis etiquette, but I guess you could say I was the original Nick Kyrgios.

I was a big fan of Michael Chang, so I remember watching him. He was so exciting to watch. I loved how he chased down every ball and that he wasn’t conventionally sized. My mum used to work for a catering company at Kooyong and I remember she got us in once to watch Michael Chang play Pete Sampras. It was a five-set match and one of the most exciting matches I’ve still ever seen. My mum was serving food in the VIP area and after the match, my two sisters and I snuck in there. I had a notepad and went up to everybody asking for autographs, even if I wasn’t sure if they were tennis players or not. I was pretty eager and had no shame.

Watching Michael Chang play Pete Sampras is definitely a favourite tennis memory of mine. I also met Anna Kournikova once, so that was pretty impressive to all my friends the next day at school. I saw her after one of her matches at the Australian Open. She was walking through the grounds and I yelled out ‘Anna!’ She turned around and I asked her to sign something for me. This was pre-selfies, so getting an autograph was gold back then. I was the envy of everyone!

How often do you attend the Australian Open?

I go most years. It’s fun being there to watch, it is such a great Melbourne event. The football and cricket can be rowdy, but tennis is all about fun and positive vibes. The crowd is always upbeat and there is a lot of colour. It is family friendly and feels like summer. The Australian Open really brings out the best in crowds. I’m really all about the atmosphere and I feel like tennis has the best atmosphere of all our sports. I’m not really a sports person so for me to love a sport is an exception to all my rules, but I genuinely love tennis. It’s also the one thing that my sisters and I bond over as well.

I am a fan of Nick Kyrgios. He is exciting to watch when he is playing well. I like too that he brings a different energy to the sport. He actually reminds me a lot of the guys I grew up with. My friends and I enjoy roasting each other and he seems like he has similar personality – but he is in a world where that is not the culture. I love though that he still tries to maintain his personality and does good things to help others off the court. He is growing into someone that I think we are all going to really love.

Serena Williams. I think she’s so cool, I really like her personality. She’s a great role model too. I love her family’s story of where they grew up and the dream their dad had for them, it’s really sweet and inspirational. She’s made it too in a world that is traditionally white. I got to watch her play last year at the Australian Open but I love to meet her. She’s the sort of person who would make me laugh and I think I’d have the greatest chance of becoming best friends with her out of all the tennis players. She comes across really fun in her interviews too, so I’m sure we’d have good banter. She’s an entertainer and I like entertainers. I really want to be her best friend!

The best part of the Australian Open is … all the free stuff you can get! I like the battery-operated mini fans and the lollies. I got a stress ball once and I was playing with it inside one of the arenas. It exploded because of the heat and the goo went all over my clothes, so that wasn’t so good. The sponsors get so creative every year, it is always fun to see the new ways they try to get people to come to their displays. I fall for all the tricks!

Tennis is fun because … you’re only ever a point or two away from getting back into a match. It’s fun to watch and it is fun to play as well. For me, merely getting the ball back over the net feels like a major accomplishment too!