Victory in the UTR Pro Tennis Series final in Brisbane was both a reward for Alexander Crnokrak’s unwavering work ethic and a confidence-boosting indicator of a bright career ahead. 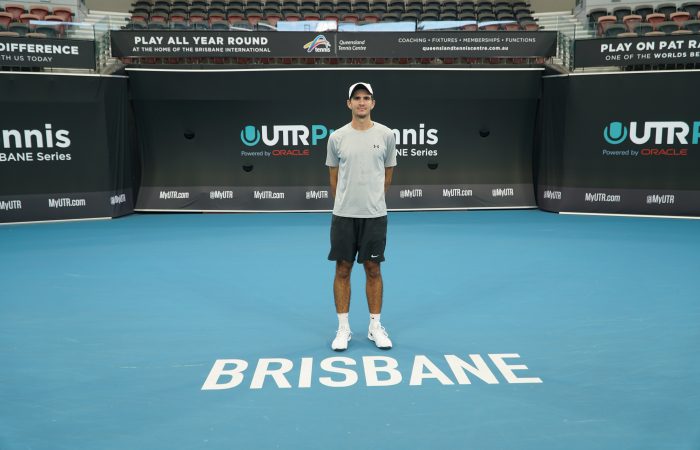 While much has been made of the lost opportunities for professional players during the suspension of international tennis events, many have also recognised a priceless opportunity for development.

Alexander Crnokrak is among that group, the 20-year-old emerging from some dedicated months on the practice court to claim victory in the third UTR Pro Tennis Series event in Brisbane on Sunday.

“It was a pretty good tournament. I played pretty well the whole week,” said Crnokrak, adding he was most pleased with his steady improvements over the last month.

“I just had more matches and I was just a bit more confident with my groundstrokes and the way I served. I was working on some new things during the break and was just testing them out … I’m happy it worked out well this week.”

In the last two events of the domestic series, Crnokrak surrendered just one match – doing so against Adam Walton two weeks ago. There was just a single set dropped at the most recent UTR Pro Tennis Series event in Brisbane, when Dane Sweeny pushed the determined young competitor to a match tiebreak.

The most rewarding scalp was unquestionably Jason Kubler, who had been flawless so far in the UTR Pro Tennis Series until Crnokrak’s 7-5 6-3 victory.

“It was definitely one of the highlights during the week. It was good playing him. I knew it was going to be tough because he’s a very strong player and he hasn’t lost a match so far,” said Crnokrak, who at world No.656 is ranked over 400 places below the more vastly experienced Kubler.

The confidence-boosting progress is a reward for the intense focus that Crnokrak maintained amid the turmoil created by the COVID-19 crisis.

“I’ve just been training pretty much every day. There’s always something new I’m working on but then I’m not sure how it will work in matches, so these tournaments were perfect for me to actually test it,” he related.

“I’m glad we got the opportunity, that Tennis Australia and UTR made these tournaments possible for us.”

While many players used the tour shutdown as a chance to relax or enjoy new past-times, the young Queenslander instead targeted opportunities for improvement – whether that be at informal hitting sessions near his Gold Coast home, or training with coaches including Mark Draper and Wayne Arthurs at the National Academy in Brisbane.

There was also a chance for Crnokrak to learn from the professional players who’d returned home due to the tour shutdown, including Kubler and Maverick Banes.

“I think that’s helped me a lot, because the way they bring intensity to every training session I can learn from them. It really helped me to get better,” the younger Queenslander explained.

Crnokrak could soon be among that group if recent progress is a guide. A winner of the Australian 18/U Championships in December 2017, the 20-year-old has more recently been making gains at ITF level, achieving a peak world ranking of No.648 in February.

An initial 2020 goal to crack the ATP’s top 350 this season is inevitably on hold, but a longer-term objective to reach the world’s top 100 appears well within reach for the committed competitor.

A long-time fan of Novak Djokovic, Crnokrak takes inspiration from his idol while recognising his individual strengths as a player.

“He obviously does a lot of things well, he’s number one in the world. He sets a good example of how to be professional and what the very top of levels like so definitely I’ve learned some things (from him) but then my game’s also a little bit different,” he said.

Gaining a reputation for the power he can deliver from his 191 cm frame, Crnokrak explained how his game is constructed around a big serve.

“I know if I’m serving well, I can push some of these better guys to be closer into the match with them and then I can relax more on my groundstrokes,” he said.

Confidence is the other critical factor – and it received a considerable boost after Brisbane success this month.

“It was huge,” said the understated but delighted winner. “I’ve been playing well practice but to be able to do it in matches was really good.”