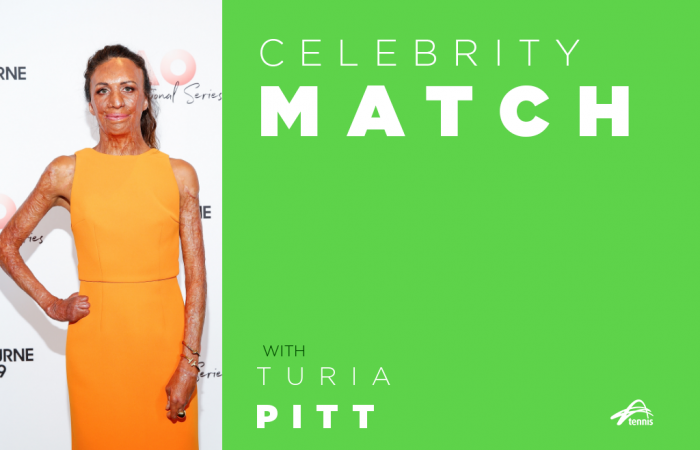 Turia Pitt is a best-selling author and motivational speaker. She was a special guest at the AO Inspirational Series in 2019, visiting the Australian Open to share her story of a brave recovery after being trapped in a fire while competing in a 100-kilometre ultra marathon in the Australian outback in 2011.

In our Celebrity Match series, Pitt reveals which players most inspire her …

Yes! I was in division two in Ulladulla (in New South Wales). So look, I wasn’t “bad” but I definitely wasn’t up there with the brilliant players in division one.

I have a vague and fuzzy memory of me battling it out on the courts with my nemesis at the time – a 12-year-old girl who I went to school with. She was a better player than me, but I had more endurance. It was a hot and steamy 35 degrees summer’s day, and I managed to stay in the game – not because of my skill but because of my sheer persistence. So look, it wasn’t like I aced my way to victory, but I hung in there!

My parents bought me a block, that had a tennis ball attached with an elastic band to it. I could hit the ball out, and it would return via the elastic band. In the morning, I’d wake up early and be so pumped to go hit my ball. It was a formative lesson for me: if I had something to look forward to, it made it so much easier to get out of bed.

Gah, I’m a bit embarrassed, but the first time I’ve been to the tennis live was when I was invited to the Australian Open in 2019.

Dylan Alcott. I’ve met him before, but I’d meet him again easily! He’s funny, he’s passionate and he says it like it is.

The best part of the Australian Open is … look, the tennis is great, but for me, it’s the people watching.