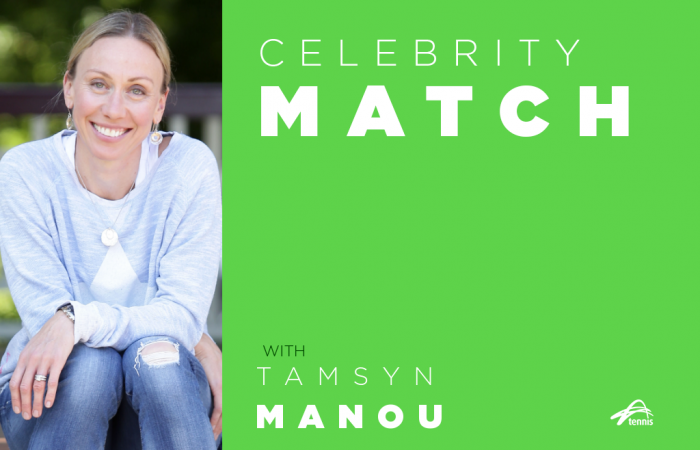 Tamsyn Manou (nee Lewis) is a retired track and field athlete who won 18 Australian titles during her professional career. A three-time Olympian, her career highlights also include winning three Commonwealth Games gold medals and the 800-metres title at the World Indoor Championships in 2008. Now a mother of two, Manou is a commentator and presenter.

In our Celebrity Match series, Manou reveals learning how to play tennis is also on her to-do list …

I have, but my tennis career was short lived. I went to an all girls school and in year eight decided I wanted to have a go at tennis, which was a sport they offered at the school. In my first lesson the teacher was being really gentle and hitting the ball across the net quite softly, but I got really aggressive and hit a forehand back really hard. It hit the girl on the other side of the net in the head and she ended up having to go to the sick bay. So that was the end of my tennis career.

Do you wish you had played more?

I do. When you stop elite sport, you start looking at other sports that you can do with friends to keep fit socially. Tennis is next on my list that I want to try. I’ve got friends who play and they just love it. Tennis one of those sports where you can play it for your whole life and still enjoy it, so I’ll definitely give it another go. I’ve got my daughter playing tennis and she loves it.

Why did you sign your daughter up to ANZ Tennis Hot Shots?

Our daughter has got really good hand-eye coordination, so we thought ‘what sport should we get her to do?’. My husband (Graham Manou) played cricket and I was a runner, so she kind of ended up in tennis by luck. It has been great though and the coaches she’s had have been brilliant too. It’s now one of her favourite sports, so we’ve been very lucky. She’s only five, so it’s just about her enjoying it.

My first memory of tennis is my mum and dad, who both also did athletics, playing and watching them. That was their social fitness outlet.

What is your favourite tennis memory?

I grew up in Melbourne, so I love January and the Australian Open. I love going along and sitting on the outer courts. One of my best memories I have from tennis though is when I was training over in Wimbledon as an athlete.  I bumped into Wally Masur and Paul McNamee, who asked if I’d even been to the tournament and I said no, but I’ve always wanted to. So they got me tickets and I was fortunate enough to go along to watch Pat Rafter play Andre Agassi in the semifinals. It was the most amazing match and went five sets. In the end, Rafter won. They also gave me a ticket to the player’s area, so after the match I had a look around and I remember getting lost and found myself outside Rafter’s locker room. He was out the front waiting for his family and he saw me. I panicked and said ‘great game, mate’ then ran off. Some very friendly security guards quickly realised I was completely lost and escorted me back to where I was meant to go. It was a pretty memorable experience!

I can’t, which is bad, but that’s because I started going to the Australian Open when I was really young. Every year, my parents would get us tickets for one night session and we went along with our neighbours. I do remember as a kid always looking forward to that night in summer when we got to go to the tennis.

I’m such a Rafael Nadal fan! I’d like to think I’m not too much of a fan girl, but when I was at the Olympics he is the only person who ever made me starstruck. I remember at the 2008 Olympics, Rafa walked past me and I was just in complete awe. I didn’t speak to him – there’s no way I could have even got words out. I was completely starstruck. He’s just got this presence about him. I love the way he plays too, his personality and how he plays the game in the right spirit.

If you could meet any tennis players, who would it be and why?

I’d love to meet Rafa and I’d also love to meet John McEnroe. I’m a big fan of his too. I enjoyed watching him when I was growing up, he had so much personality and was so entertaining. He’s one of those people who you remember as a child. Even now as a commentator he has an opinion and is happy to give it, but he still has a great personality that comes across and he has a bit of fun. I really like Jim Courier too and Serena Williams would be pretty cool to meet as well. Of the Australians, oh my god my list is too long. I loved Lleyton Hewitt and the way he played the game, he always fought. Rafter was good too, we’ve had so many great tennis players. Ash Barty is such a star. She’s so inspiring and I’ll definitely take my daughter to watch her play next year.

Another late night watching tennis. These men’s games have been intense!! Rafa’s my fav though so fingers crossed he can hold off the spirited Cilic. pic.twitter.com/JlnBPIEu2U

The best part of the Australian Open is … the atmosphere. You walk through the gates and you’re transported into a real worldwide sporting event. There’s people from lots of different nations there and you can sense it is a really special occasion. I love being out and about at the Open too, not necessarily sitting in the arenas. There’s so much on show and there’s so much entertainment.

Tennis is fun because … you can play it at all different levels. You can play it socially where it’s relaxed and a game to keep fit, but it can also be competitive where you can see how far you can go with it. It’s a sport that everybody can participate in and you can also be a fan as well as participant. It’s one of the great sports that is all encompassing of all people.

Hopefully we’ll see you out on court soon, Tamsyn.

I’m definitely going to play, I just need to find someone who is willing to play with me. I’m scared if I ask my husband to play, it could get too competitive!