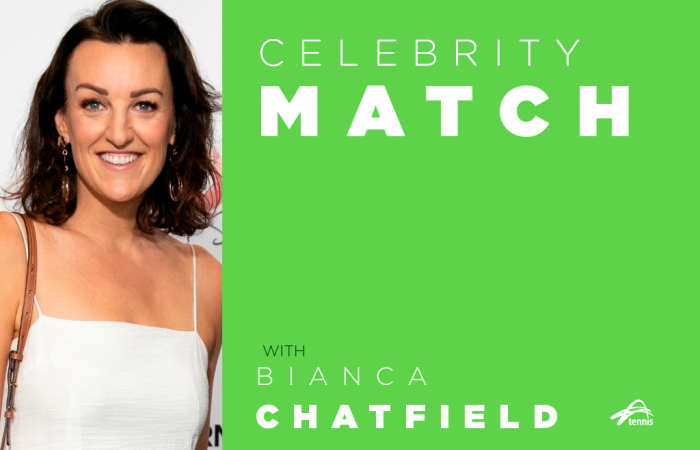 Bianca Chatfield is one of the youngest players to ever represent the Australian Diamonds, making the national netball team at age 18. She enjoyed a stellar playing career, winning a gold medal at the World Championships in 2007 and a Commonwealth Games gold medal in 2014. Chatfield also won six national premierships, claiming four during her 133-game stint with Melbourne Phoenix and two during her 113 games with the Melbourne Vixens. Since retiring in 2015, the champion defender has appeared as a contestant on renovation television show The Block and become a leadership mentor.

In our Celebrity Match series, Chatfield reveals she is a long-time tennis fan …

I have never had lessons, I wish I did when I was younger. I grew up loving tennis purely from having a hit on my cousin’s court. This happened a lot, especially over January when the Australian Open was on.

I wouldn’t say I have a best shot, but I do feel I have more control with my backhand than any other shot. My forehand ends up over the baseline far too often!

Probably my Dad having a hit with me. I would have been about six or seven. I can remember the racquet being heavy and I had no control. I just wanted to hit the ball as hard as I could.

I remember my Mum waking me up in the middle of the night so I could watch Steffi Graf win her first Wimbledon. I never quite knew why she wanted me to wake up for it, I was around five or six, but now I love that she did. It was so inspiring watching female athletes, probably a huge part of why I wanted to be an athlete.

I don’t remember my first game specifically, but it was always a tradition to go to Melbourne Park and buy a ground pass in the school holidays. I remember hoping it was a day where Pat Rafter was training on the back courts.

I have always been a big Serena Williams fan and it’s hard to not love Ash Barty. She has such a unique and refreshing perspective on life as an athlete. I also now really love watching Naomi Osaka after she won the Australian Open in 2019. And you can’t ever go past Roger Federer for the way he plays the game and the fact that he’s been a champion athlete for so long.

Andre Agassi, his autobiography is the best I have ever read. I love his honesty and he seems like he would be a huge amount of fun.

The best part of the Australian Open is … the accessibility of the tournament to everyone and the contagious excitement that spreads around Melbourne when it’s on.

Tennis is fun because … it’s a game that can be simply played just for fun.