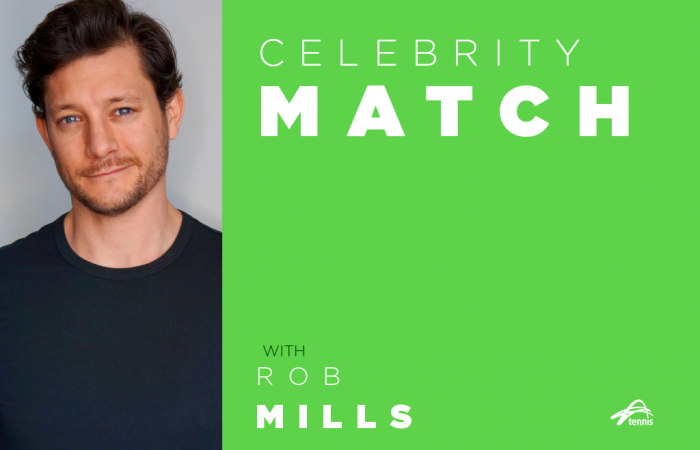 Since bursting into the spotlight with a fifth-place finish on Australian Idol in 2003, singer Rob Mills has become one of Australia’s most-loved entertainers. He is now a television presenter and actor, most recently starring in Neighbours and finishing runner-up on The Masked Singer. Mills is an accomplished theatre performer too, wowing audiences with lead roles in Australian productions of Grease, Hair, Wicked, Ghost and Jesus Christ Superstar.

In our Celebrity Match series, Mills reveals his newfound passion for tennis …

I just started playing a year ago. My parents played when I was a kid, in fact one of my earliest memories is of me as a toddler at my Mum’s mid-week tennis matches. I played footy, cricket and baseball and we had a table tennis table. But now I am obsessed with tennis, especially since lockdown is over. I have signed up at a local club and play Wednesday night social tennis.

My forehand is my best shot. I’m still getting the hang of it, but hit with slight top spin.

It would have to be summer school holidays at Grandma’s in Blairgowrie. She would let me stay up late so we could watch the tennis together on television. It was proper bonding time. My favourites to watch were Andre Agassi, Boris Becker, Pete Sampras, Steffi Graf and Martina Hingis.

My favourite so far would be coming runner-up in my first ever tournament! D Grade doubles at last year’s Yarrawonga tennis tournament. I had played only two matches prior but luckily, my partner was quite good.

I was 18 and my older brother and I went to the Australian Open. We saw Anna Kournikova, who was my teenage crush.

I would have to say Roger Federer. He’s such a competitor on the court and I love his one-handed top-spin backhand. He watches the ball right onto the racquet every single time. He’s the master.

I’d like to meet Nick Kyrgios, have a few beers and chat about media scrutiny and what it’s like to be him. I think he is one of best on the tour. I’d also cheekily ask for a lesson.

The best part of the Australian Open is … the atmosphere! The amount of off-court entertainment now is incredible. I went twice last year and twice the year before. I took my nieces and we had the best time. So many activities and live music. Oh and the tennis too!

Tennis is fun because … everyone can play it and you can play all year round. I am so glad I got asked to be in that tournament last year. It’s been great for meeting new people and keeping me fit.