A return to professional tennis this season has tested Chris Guccione is many different ways. 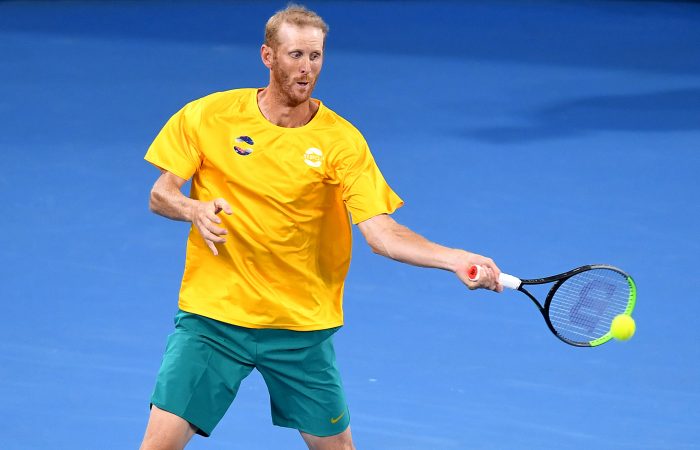 Chris Guccione was prepared for a challenge in 2020 – and there has been several to face.

The 34-year-old made his professional comeback in January, three years after injury forced him off tour. Guccione had partially torn his right Achilles earlier in his career and following years of overcompensating, his left Achilles was also causing issues. He decided to take time off after Australian Open 2017, where he had made the men’s doubles quarterfinals and mixed doubles semifinals.

“I just wasn’t able to continue with the way my body was,” Guccione told tennis.com.au.

A top 40-ranked doubles player at the time, Guccione applied for a protected ranking to keep his options open for a potential return.

“I wasn’t too sure,” Guccione said of whether he believed he would ever return to the tour.

He joined his brother operating Guccione Tennis and accepted a head coaching position at Greenvale Tennis Club in Melbourne.

“After a couple of years of coaching and not doing too much else, my injuries healed up and felt better,” Guccione said. “So I decided to start training again.”

An injury-free Guccione adopted an intense training routine in mid-2019, with an eye on using his protected ranking for the Australian 2020 summer.

“I didn’t know if my Achilles would flare up again if I came back, but they didn’t,” he said.

“Getting back into shape was hard, but it was enjoyable as well. It is easy to train when you’re not injured. The last few years of my career, I was unable to train because of injuries. The motivation was always there – I never stopped enjoying competition and competing at a high level.”

After losing close to 30 kilograms, Guccione proudly lined up for Australia in the inaugural ATP Cup.

“To be able to come back to play in a Grand Slam and the ATP Cup spurred me on even more,” Guccione said.

“Especially being able to start here in Australia.”

“I always knew I had the tennis in me, I just had to get back there physically and to be able to move pain-free again,” the five-time ATP doubles champion said.

“Obviously I was nervous because I hadn’t played a match in a few years, but I was also excited. It was good to be back out there and the guys were really good about it and welcomed me back. I knew I was training well and hitting the ball well. I’d been training with some of those guys in December and keeping up with them fine. It was just a matter of transferring it onto the court, which I’m thankful I did.”

Guccione’s Grand Slam return was also successful, advancing to the Australian Open second round alongside fellow Australian Matt Reid. With his eight-year-old daughter and five-year-old son supporting him at Melbourne Park, Guccione described their first-round win as a proud moment.

“I had all my family and friends there and it was good my kids could see me competing at that level. They got a real kick out if it,” he said. “My daughter remembers a little bit of me playing earlier, but my son didn’t have any memories.”

In four tournament appearances, Guccione went from unranked to his current positon of No.267. His comeback is now on hold though, a result of the COVID-19 pandemic forcing the suspension of professional tennis.

“I was looking forward to getting out there and playing where I can. I’ve got a coaching business here so it would have been a limited schedule, but I was definitely looking forward to playing more tournaments throughout the year,” Guccione said.

“Everything is up in the air at the moment. But when the tour is able to resume, I’d still like to play for sure.”

With COVID-19 also impacting his coaching business, Guccione is relieved physical distancing restrictions have eased and courts have reopened in Victoria.

“It’s been quite hard financially, but we’ve made it through and we are back coaching now. There’s still restrictions, but it’s just good to be back out there,” he said.

The 18-time Davis Cup representative has found positives from the situation too, enjoying the extra time with his young family.

“It was a good opportunity to spend some time at home with the kids and help them through some learning,” he said.

Guccione is not giving up hope of ending 2020 how it began, competing once more against the world’s best players.

“For the time being, I’m training in Melbourne and doing some coaching to get by and we’ll see what happens with tournaments,” he said.

“Hopefully we might get to play later in the year.”