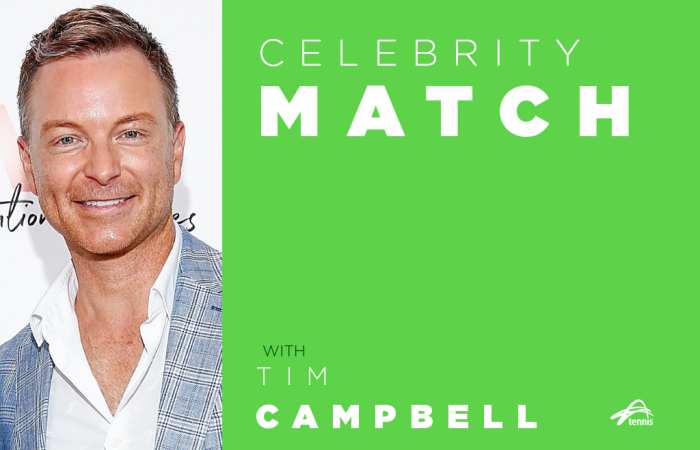 Tim Campbell is a popular Australian entertainer. He has starred in Home and Away and House Husbands, finished third as a contestant on Dancing With The Stars in 2007 and hosted a number of television programs including National Bingo Night, Wheel of Fortune and The Singing Bee. A regular performer at Melbourne’s Carols by Candelight, Campbell has also showcased his musical talents in theatre productions across the country and fronts his own band. During isolation, Campbell and his husband Anthony Callea have kept busy entertaining their social media followers with hilarious at-home skits and performances.

In our Celebrity Match series, Campbell reveals his love of tennis began at a young age …

I am a Little Athletics kid from way back, so happy to chase the ball for a forehand down the line. Granted only about 50 per cent land in and the knees don’t allow for as much thrill of the chase anymore.

I can certainly remember playing at the local Leumeah tennis courts and also much to Mum’s dismay,  sand being brought into the house post match. I equally have a distinct memory of watching the Australian Open on TV in the hot summer, while building Lego structures in the foreground. Who knew that both the Australian Open and Lego would be even more popular today. I was so post modern!

If it’s not playing as a child as mentioned, then it’s having to explain the rules and scoring of tennis every year to Anthony Callea. EVERY YEAR. Okay, maybe this isn’t a favourite memory …

Not a bad way to enjoy the Aus Open – champagne with the champions… of course I meant you @anthonycallea and not Serena! Thanks for a beautiful day @piper_heidsieck and @romanobeck #AdvantagePiper

I was in Melbourne in 1994 and I saw an Australian Open first round match between Pete Sampras and the Aussie Joshua Eagle. I know it’s unpatriotic, but I did have a Sampras crush so was happy with his win. Soz Josh!

So many to choose from. I do still love to catch Roger Federer and Serena Williams in their matches. Growing up, I loved to watch the fire and passion of Boris Becker and Martina Navratilova.
Anyone who has that extra fire in their game, no matter their ranking or experience is always an absolute joy.

I would love to meet Martina Navratilova one day. I have loved her passion and tennis game as a child right up to today … don’t ruin it for me Martina!

The best part of the Australian Open is … the atmosphere. The event grows each year, showcased as world class and is certainly never a let down on the Melbourne calendar. Okay, that’s two sentences sorry. Now three, urgh!

Tennis is fun because … you know, TENNIS! Got it in one!

Very fun match and brilliant cause. So generous to have the top players donate their time. Thank you for having us and helping to support the AO #RallyforRelief @elleroseby @anniecipressi @countryroad ✌️✌️❤️❤️