To celebrate the one-year anniversary of Ash Barty's French Open victory, we reflect on her breakthrough run. 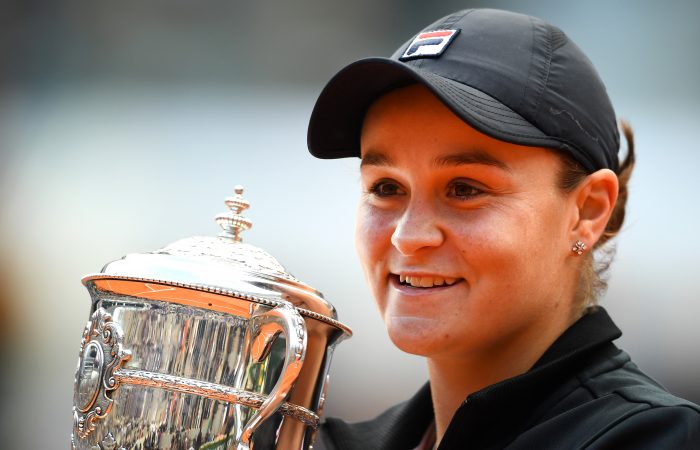 A year ago Ash Barty won her first Grand Slam singles title. Her sensational victory made her the first Australian singles champion at Roland Garros since Margaret Court in 1973.

A WINNING START
First round, defeated Jessica Pegula (USA) 6-3 6-3
Barty began her Roland Garros campaign with a straight-sets victory over American Jessica Pegula. “There were a lot of things that I would have loved to have done better in that match but we did enough to get a win, so that’s the most important thing,” Barty said after defeating her No.72-ranked opponent in 60 minutes. “We’ll just go back and refine a few things on the practice court, but overall I feel like I’ve been playing a really good level of tennis over the last month. So it’s just about going out there and trying to improve on that and continuing to do that every match.”

BUILDING MOMENTUM
Second round, defeated Danielle Collins (USA) 7-5 6-1
After a tight opening set against Australian Open 2019 semifinalist Danielle Collins, Barty finished their second-round match strongly. “I knew that I needed to be better than I was in my first round, and overall it was a much better performance. I think it was more solid,” Barty said after defeating the world No.36 in 78 minutes. “I served well. I was a little bit smarter with where I served on those bigger points and was able to get myself back in control. I think ultimately that’s what we’re after, when you’re in the big points and the big moments is to come up with your best tennis.”

STAYING FOCUSED
Third round, defeated Andrea Petkovic (GER) 6-3 6-1
In her third-round debut, Barty was clinical in defeating French Open 2014 semifinalist Andrea Petkovic. The 23-year-old Australian hit eight aces in a 60-minute victory. “I feel like I’m playing well and being able to execute to make the score lines look a little easier than the match actually is,” Barty said. Even after world No.1 Naomi Osaka and 23-time Grand Slam champion Serena Williams both lost in the third round, the No.8 seed was down playing her title chances. “Obviously there’s talk and it’s unavoidable to hear what else is happening around the draw. But for me, I can’t control any of that. I can’t control what other girls are doing,” Barty said. “I can only control how I prepare, how I play, and ultimately how we go about my next match.”

A TURNING POINT
Fourth round, defeated Sofia Kenin (USA) 6-3 3-6 6-0
With expectations rising, Barty stayed strong after a second-set wobble against American Sofia Kenin in the fourth round. “I lost my way a little bit tactically,” Barty admitted after losing the second set against Serena Williams’ conqueror. Barty’s steely recovery against the world No.35 impressed Australian legend Todd Woodbridge. “If she’s going to win majors anywhere, she needed to win that set. When you get those windows of opportunity, you need to grab them, because if not they can become scars,” Woodbridge noted. “She goes out and wins that set 6-0, and you think, ‘She’s ready’.”

TAKING CONTROL
Quarterfinals, defeated [14] Madison Keys (USA) 6-3 7-5
A No.76-ranked Barty lost to Madison Keys in straight sets in the 2017 French Open opening round. It was a different story in the 2019 quarterfinals, with Barty confidently dictating points against the big-hitting American. “That’s probably close to my best match that I have played over the last month, I think, on the clay,” Barty said. “It was a really clean match. I felt like I was in control. I got the balls I wanted, and I was able to put the balls in difficult positions for Maddie. Really, really happy with how we went about it.”

SURVIVING A TEST
Semifinals, defeated Amanda Anisimova (USA) 6-7(4) 6-3 6-3
Barty made an almost perfect start in her first Grand Slam semifinal, racing to a 5-0 opening set lead with the loss of only three points. But as Anisimova saved two set points and reeled off six consecutive games, the momentum shifted dramatically. The 17-year-old American, who had upset defending champion Simona Halep in the quarterfinals, took the opening set in a tiebreak and built a 3-0 lead in the second. Yet Barty did not panic, winning the next six games to level the match. The No.51-ranked Anisimova saved three match points when trailing 2-5 in the deciding set, before Barty served out the match in the next game on her sixth match point. “(It was) an absolute roller coaster,” Barty said. “I’m just proud of myself the way I was able to fight and scrap and hang in there and find a way.”

CROWNING MOMENT
Final, defeated Marketa Vondrousova (CZE) 6-1 6-3
Not even a delayed start – due to the completion of a rain-delayed five-set men’s singles semifinal – could slow Barty’s quest to win a maiden Grand Slam singles title. The Australian hit 27 winners to Vondrousova’s 10 in a dominant performance during the 70-minute final. “I just kept saying to myself, I may never get this opportunity ever again, so try and grab it with both hands,” she said. “I felt like for me it was the perfect tennis match, considering the situation, the conditions, and kind of all of the above. It was amazing.” Vondrousova could only praise Barty’s convincing performance. “She gave me a lesson,” the 19-year-old Czech conceded. “She didn’t let me play my game … she was just better at everything.”

CELEBRATING A NEW CHAMPION
Barty’s victory made headlines across the world, with past and present Australian tennis players among the many sharing their congratulations. Evonne Goolagong Cawley, Barty’s idol, described her as “a joy to watch”, while 24-time Grand Slam singles champion Margaret Court praised Barty’s game and declared “there’s not a weakness there”.
An ever-humble Barty described her Grand Slam breakthrough as: “it’s incredible and I’m speechless”.