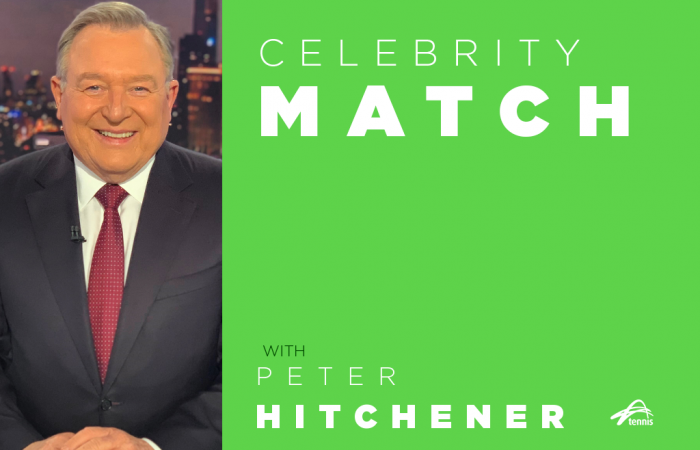 For more than 45 years, Peter Hitchener has been a newsreader with the Nine Network. He has hosted Melbourne’s weeknight bulletins since 1998 and received an Medal of the Order of Australia (OAM) in 2017 for his services to the broadcast media and community.

In our Celebrity Match series, the delightful television and radio presenter reveals his passion for tennis …

I have played tennis, on and off, for most of my life. I grew up in the bush and we had an ants-nest tennis court at my primary school. I played there a lot. We didn’t have competitions, it was more like a forerunner to Cardio Tennis. Gosh, it was good fun. I loved it.

How often do you play?

I played every day for 30 years. I was absolutely addicted to it, but then my knees decided they didn’t like it so much so I had a break for a while. But recently, I’ve returned to tennis and instead of playing every day I’ve been playing Cardio Tennis three times a week.

My backhand, by a long way. I have a single-handed backhand and unlike most people, I’d happily run around on my forehand so I could hit a backhand instead.

Rain, hail or shine, there’s nothing nicer than a cardio tennis session! PS thanks so much for the birthday wishes, most grateful!

I’ve got several tennis memories that I remember with great pleasure. One was meeting Evonne Goolagong Cawley at the Milton courts in Queensland. I grew up in Queensland and this was during her playing career. She was just lovely.
I’ve played tennis several times with Hugh Jackman when he and (wife) Deborra-Lee (Furness) lived in Melbourne. That was fun.
I also remember playing an exhibition match in the very early days of Melbourne Park with the great Eddie McGuire. Eddie, ever the showman, arrived with a cheer squad that put the rest of us to shame. It was good fun.

Yes I do – and it actually wasn’t professional back then, because this was in 1958. It was at the Milton courts in Queensland and it was a Davis Cup challenge round between Australia and the United States. Some of the big names of Australian tennis at the time, including Neale Fraser, Lew Hoad and Mal Anderson, played for Australia. For the Americans, Alex Olmedo was one of their players and Pancho Gonzales was there too. He didn’t play but was one of the coaches. We lost which was disappointing, but just watching the tennis was wonderful fun. The grandstands were packed. It was a sell out and just terrific.

This is a hard question. I guess Roger Federer because I’ve seen him so often over the years. I just like the way he goes about it. He is courteous, entertaining and has all the shots of course. I love his backhand too. Watching any of the world’s top players is terrific. I have great admiration for what they can do and for what athletes they are.

I would like to meet Roger Federer, especially since he has such a fondness for Australia. Any of our local players would be terrific too.

Have you met many famous players through your work?

I’ll tell you who I love seeing, and I do see them quite often, is Todd Woodbridge and Sam Groth. They are here at Channel Nine a lot and they are absolutely delightful, funny and charming. They are people who have done huge amounts in their careers, yet are very down to earth and friendly. I consider myself lucky to have that connection.

The best part of the Australian Open is … the carnival atmosphere. Everyone has fun and people turn up in their thousands. In the past, this has included people from all over the world – not quite sure how it is going to be next time. But for my money, it is the great Melbourne festival because it is something everyone absolutely loves.

Tennis is fun because … there is nothing like the enjoyment you get out of a game of tennis. Win, lose or draw you come off the court and somehow feel refreshed and energised, no matter how hard the match has been.