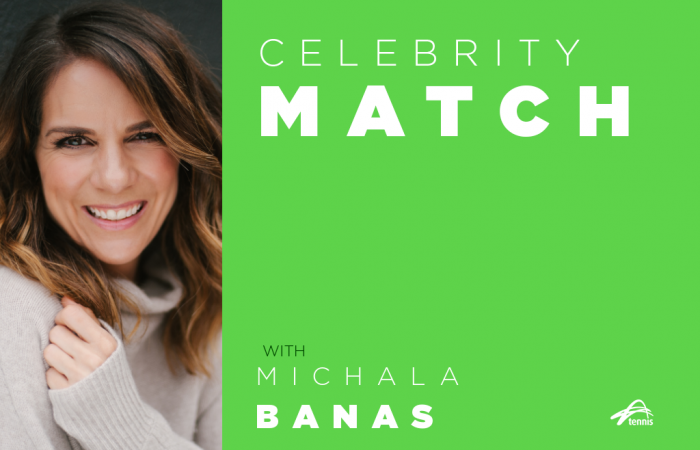 Michala Banas is an award-winning film, television and theatre actress. In her remarkable career that spans more than three decades, she has starred in an impressive array of television dramas including Always Greener, McLeod’s Daughters and Winners and Losers. Banas, who is also a writer and producer, demonstrated her comedic flair in Upper Middle Bogan and will soon feature in the Nine Network’s Halifax Retribution.

In our Celebrity Match series, Banas reveals playing tennis is not one of her many talents. She loves watching it though …

I’ve not played tennis. I definitely tried a few times when I was younger, but I’m just not coordinated when it comes to sports in general. I quickly realised I wasn’t going to be the next Evonne Goologong, so moved on to playing the piano badly instead. I think that’s why I love watching tennis so much – I really appreciate how skilled the players are, and how much discipline, dedication and hard work it has taken to get them where they are.

Did you master any shots when you tried to play?

I’m not a bad ball girl. A bit slow, but I’m happy to be up close to the action.

Riding my brother’s plastic push-along motorbike in a tutu around the perimeter of our neighbour’s tennis court while the boys attempted a few hits over the net. I would have been four years old maybe? Motorbikes, tutu’s and tennis – I was a kid with lots of interests!

I remember being invited to the Australian Open for the first time about 15 years ago. It was the first professional tennis tournament I’d ever been to, and I just loved it! I’d always liked watching tennis on TV at home, but to sit and watch it in person, to be part of the atmosphere of a great match, was intoxicating. I was hooked.

It was an Australian Open semifinal between Lleyton Hewitt and Andy Roddick in 2005. C’mon!

I’m sure many people will say this, but I love watching Serena Williams. She is such a powerhouse and an incredible athlete. Just amazing. And, another obvious choice, but Roger Federer is my favourite male player. I can never get over how composed he keeps himself. He’s such an exceptional tennis player, but he gives nothing away emotionally. It’s really impressive to watch.

The best part of the Australian Open is … the atmosphere.

Tennis is fun because … you can appreciate years and years of someone else’s intensely hard work, all from the comfort of your couch.