Volunteers: The heart of a tournament

To mark National Volunteer Week, we look at the important role volunteers play at tournaments. 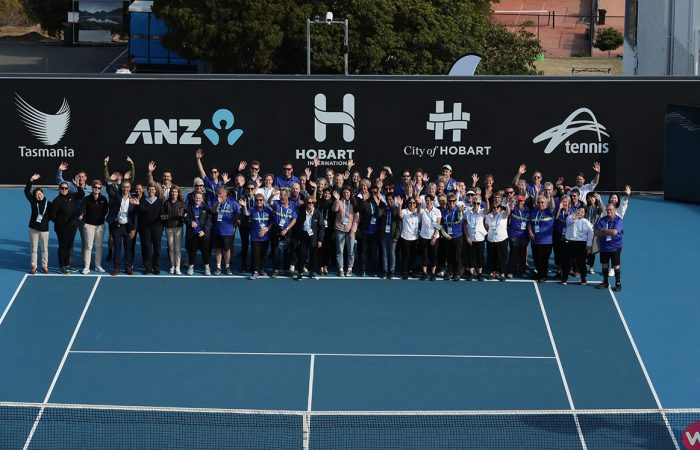 Volunteers play crucial roles in helping run tournaments across the country. From junior level to professional events, the willingness of these volunteers to offer time and service creates competitive opportunities for others.

A team of 77 volunteers assisted at the Hobart International in January 2020. Volunteer roles included player, court and patron services, as well as event operations, corporate hospitality and courtesy car driving.

“The volunteers are the heart of our event,” said Hobart International Tournament Director Darren Sturgess.

“We only have a small team, so without the help of our volunteers it would be impossible to stage the tournament. We held our 27th edition in January, which is a reflection on the ongoing support of our Tasmanian community and the pride in which they feel for the Hobart International.”

From that 77-strong team of Hobart International volunteers, 25 have been involved with the tournament for 10 plus years. Dale Forwood is one of the longest serving, with his involvement stretching back to the inaugural 1994 edition.

Forwood is a long-time volunteer at the Domain Tennis Centre, which hosts the annual tournament. He was the centre’s first president and four decades on now manages the clubhouse bar.

During the Hobart International, the clubhouse bar forms part of the private player’s lounge and dining area. It makes it a busy period for Forwood, who helps serve competitors and their teams.

“The rule has always been we’re not supposed to talk too much to the players, but I’ve always talked to them. They’re friendly people who sometimes need an ear or just want to have a chat,” he said.

“Meeting the players, their families and their coaches is something I really enjoy. Coming from many different countries, they always have stories to tell.

“A lot of the players come back each year and you get to know them and their coaches. Many remember you and will give you a big hug or a handshake to wish you a Happy New Year.”

A shout out to the #volunteers who do so much for our sport week in week out. We greatly appreciate your efforts and what you do for tennis. Stay healthy, stay safe. I look forward to seeing you again in the very near future. #NVW2020 pic.twitter.com/aHmVR3ttzF

Forwood recalled the inaugural tournament was “all hands on deck” and has fond memories of Australian wildcard Rachel McQuillan making the 1994 final.

“Rachel was a lovely lady and her mother was really nice too,” he said.

Serena Williams’ appearance in 2007 stands out as another highlight.

“The stadium was packed to see her. Every seat in the grandstand was chockers. It’s a shame she only lasted a couple of rounds,” Forwood said.

“Serena didn’t hang around much inside the clubhouse. She only came in to put down her racquet bag after a match or practice. I spoke more to her mother (Oracene) and her mother’s friend. They were very nice.

“That was the year Serena went on to win the Australian Open. There are so many players who won the tournament here or went close, then went on to win a major. Kim Clijsters is another.”

The Hobart International does have a proud history of unearthing future stars. Four of the current top 25-ranked players in the world won their first WTA title in the Tasmanian city – Petra Kvitova in 2009, Garbine Muguruza in 2014, Elise Mertens in 2017 and Sofia Kenin in 2019. Elena Rybakina broke into the world’s top 20 shortly after winning this year’s title too.

It makes Forwood feel honoured to be involved in the tournament.

“It’s one of the biggest sporting events we have in the state, especially when you consider the amount of international interest with players coming from all over the place,” he said.

“It’s a pretty big deal and when you have finished your day’s work as volunteer, you can go and sit in the stands to watch some great tennis. That’s a little perk.”

#HobartTennis is not just a tennis tournament. It is an event that means so much to the Hobart community pic.twitter.com/sEGAkx2guA

“Two hip replacements slowed me right down,” he said.

“Tennis was always my second sport, golf was my first – but I actually ended up giving up golf for tennis.”

It was on the tennis court that this hard-working volunteer found love too.

“I met my wife playing tennis, so that was another upside,” he said.

Forwood’s wife Judy volunteers alongside him during the Hobart International as well, taking leave from her job each summer to assist for the past 22 years. Their daughter was once also a tournament ballkid, spending six years in the role before later joining her parents serving in the player’s lounge.

In recent years, Tennis Tasmania has held events to thank hard-working volunteers from the Hobart International and other tournaments as part of National Volunteer Week. While social distancing rules due to the COVID-19 pandemic will limit celebrations this year, they still plan to acknowledge volunteer contributions.

“All of our hard-working volunteers deserve to be recognised, so National Volunteer Week is a great chance to say thank you,” Sturgess said.

“It is important all volunteers know how much they are appreciated.”