Today is Ash Barty's birthday and there's lots of reasons to celebrate our world No.1. 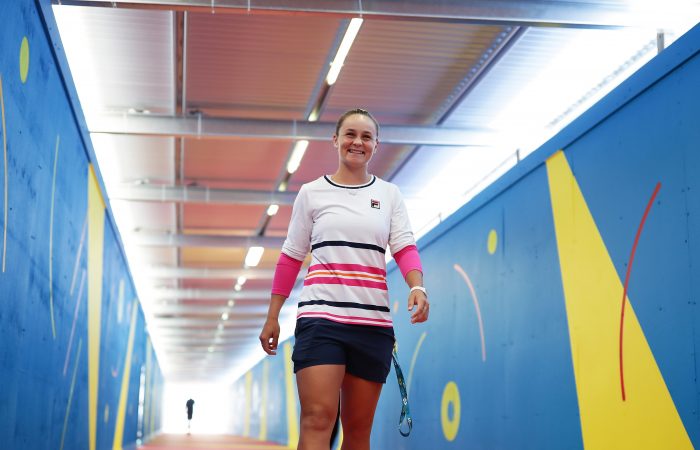 Ash Barty turns 24 today. To mark the occasion, here are 24 reasons to celebrate the Queenslander …

1: She is the world No.1 and the first Australian woman to top the WTA Tour singles rankings since her mentor Evonne Goolagong Cawley in 1976.

2: Ash is a Grand Slam champion. Last year she became the first Australian to win a French Open women’s singles title since Margaret Court in 1973. She also won the US Open women’s doubles title with American Coco Vandeweghe in 2018.

3: There is no I in team for Ash, who speaks about herself in first person plurals to acknowledge the work of her close-knit team that includes 2019 WTA Coach of the Year Craig Tyzzer. “Every single member of my team is like family to me,” she says.

4: Her natural talent was obvious when she first picked up a racquet at age four. “Her focus and concentration was just incredible,” recalls first coach Jim Joyce.

5: With her exceptional volley skills and all-court nous, Ash is a world-class doubles player. She achieved a career-high doubles ranking of No.5 in May 2018 and is the only player – man or woman – to finish the past three seasons ranked inside the world’s top 20 in both singles and doubles.

7: Ash is also inspiring more young people to play tennis in schools. “It doesn’t matter if they are boys or girls, they all want to play like Ash Barty and have a story like Ash Barty,” relates Narelle Genge, a physical education teacher at Devonport Primary School in Tasmania.

8: She is an eight-time WTA singles champion, winning five of these titles in her outstanding 2019 season. She also won the inaugural Adelaide International in January – her first WTA title won on home soil.

Home is where the heart is 💛💚 Thank you Adelaide! pic.twitter.com/KY5TeVsn1E

9: Her three-set singles record in 2019 was 19-6, highlighting her exceptional ability to handle pressure and a never-give-up attitude. “It’s never over until we’re shaking hands at the net,” Ash says. “Then you’ve either won or you’ve lost, and either way you look them in the eye and say, ‘Well played, mate’.”

10: Her natural flair was evident at age 10, the first time Australia’s Fed Cup captain Alicia Molik saw her play. “I’ll never forget it. I just thought, ‘Wow!’” recalls Molik. “Every time I watch her – in every match and every practice session – Ash is able to come up with something incredible.”

11: Ash loves representing Australia and has played 11 Fed Cup ties in her career. “Playing for my country is always a privilege and Fed Cup weeks are my favourite time of the year,” she says.

12: She recorded a tour-leading 12 top-10 wins in 2019, including four at the season-ending WTA Finals to become the first Australian champion since Goolagong Cawley in 1976.

13: Ash sits 13th on the list of most weeks spent atop of the WTA singles rankings since their introduction in 1975. In total, she has spent 35 official weeks in the top position and last year became the first Australian woman to finish as year-end No.1.

14: She is a proud Indigenous woman who loves giving back to her community. She spent time in the Tiwi Islands in 2018 and last year visited Indigenous students in Cairns. “My heritage is really important to me,” she says. “I just think it’s important to do the best I can to be a good role model.”

15: At age 15, she won the Wimbledon girls’ singles title in 2011. She made her Grand Slam main draw debut six months later at the Australian Open after winning the AO Wildcard Play-off.

16: Ash is the 2020 Young Australian of the Year, receiving the honour during the Australian Open in January. “It’s a privilege, it’s an honour, and extremely humbling,” she says. “I’m just trying to be true to myself and stick to the values that my mum and dad taught me, that my family have kind of instilled in me growing up.”

17: Family is important to Ash, who loves to spoil her nieces and nephews. Their Christmas gift this year was a backyard swing set. “I’ve got everything that I need,” she reasons on why she enjoys spoiling others.

18: Ash has won 18 of the 22 Fed Cup matches she has contested since making her debut as a 16-year-old in 2013. This included seven wins in 2019. “Ash has really stepped up both on and off the court to anchor the team,” says Australian coach Nicole Pratt.

20: She made her top 100 singles debut at age 20. After previously taking an 18-month break from the sport, Barty proved there is no need to rush progress. “Everyone has their own unique path, their own unique journey,” she notes. “I’ve had my ups and downs, but I wouldn’t change mine for the world. Every single experience, the good and the bad, I’ve learnt from. I’ve grown. That’s all I can do.”

21: In true Aussie style, Ash enjoys pranks and having a laugh. Who remembers her sneaky effort of slipping Disney references into all of her Wimbledon 2019 press conferences?

Ash Barty was all smiles after being caught out quoting Disney films in all her #Wimbledon press conferences. pic.twitter.com/9YqJTaFhJN

22: Ash loves her Vegemite too and has helped promote Australia to the world, appearing in an advertising campaign alongside Kylie Minogue, Adam Hills and Shane Warne.

23: Her hand-eye co-ordination is something that all players can aspire to emulate. She is talented at cricket and golf – and can combine those sports too!

24: Although Ash is ultra competitive, she always maintains perspective. “If I win, it’s a bonus. If I lose, the sun still comes up the next day, and it’s all good,” she says with a smile.

From all the Tennis family, Happy Birthday Ash!