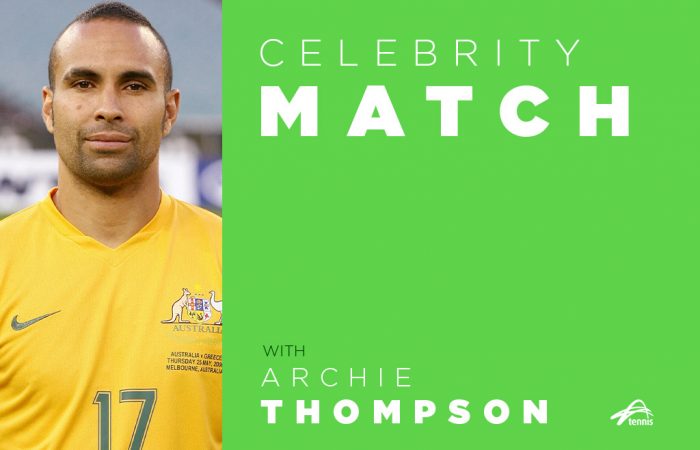 Archie Thompson is a record breaker on the soccer field. He played 261 games for Melbourne Victory, helping the A-League club win three premierships. The A-League Team of the Decade member also represented Australia 54 times in his illustrious professional career, including at the 2006 FIFA World Cup and 2008 Olympic Games. He holds the world record for most goals in an international game, scoring 13 in a 2002 FIFA World Cup qualifying match against American Samoa in April 2001.

In the first instalment of our Celebrity Match series, Thompson reveals he was once a promising tennis player too.

Back in the day when I was growing up in Albury-Wodonga, I was part of the regional McDonald’s squad. I actually had to make a choice between pursuing either tennis and soccer, which was not easy. I loved tennis, but soccer was always the number one choice. I was just a bit more talented in the soccer arena. If I had of put a lot of effort into my tennis, who knows? Maybe I might have been like Boris Becker, who I loved watching when I was growing up. My mum loved her tennis and played into her 60s and my brother still plays A Grade pennant in Melbourne.

Do you still play?

We obviously cannot right now (due to COVID-19 related lockdown), but I want to get back into it. Cardio Tennis is one thing I would love to give a go.

I would say my one-handed backhand. There were a lot of players who I loved watching with one-handed backhands, like John McEnroe and Boris Becker. This is showing my age, but Ivan Lendl was another. I never felt as connected to him as I did with other players, I think that is because he never showed a lot of emotion, but his backhand was just phenomenal.

I won a Star Player Award when I was a junior. They ran a series of tournaments around the Albury-Wodonga area and they would tally up all the points from them at the end of the season. I won the award for the most points and received a tennis racquet. Mum has kept all the newspaper clippings. With soccer I’ve had plenty of write-ups in my career, but the ones I look back most fondly on now are actually the ones I didn’t get in soccer. One that stands out is for golf, and I also love looking back at the awards I won in tennis.

There’s been lots. One that stands out is a Labour Day tournament in Albury Wodonga, which my brother still goes to each year. I once partnered my mum in the mixed doubles. She’ll never do it again because I was so bad tempered to play with, but that is a fond memory for me.

I don’t. I think it might have been Roger Federer early in his career at the Australian Open? I usually prefer to watch matches on television because I feel like you get to see a lot more.

This is too hard to answer, can I mould some players together to make my ultimate player? For me it would be Pete Sampras, Boris Becker, John McEnroe and a bit of Roger Federer. Stefan Edberg was another one I loved, as well as Mats Wilander. That was my era. I loved the old school tennis players and those who had a lot of character.

Pete Sampras. I feel like growing up watching him, and maybe it is just because I was young and didn’t see enough, but I felt like I never really got to know who he was. He is someone I would love to pick his brain, especially when I think of my own sporting career, about how he stayed so calm in matches. I’d love to learn more about his mindset because he always had a great demeanor about him.

The best part of the Australian Open is … the beer garden.

Tennis is fun because … I feel like you can experience all of the emotions of sport in one match.