Getting to know: Lizette Cabrera

An early connection to tennis developed into a successful professional career for world No.127 Queenslander Lizette Cabrera. 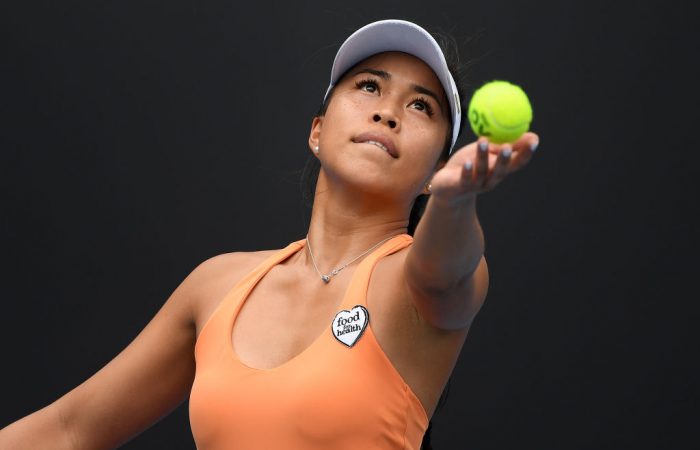 While many pro players will tell you their start in the sport game began when they were young, few can claim such an early connection as Lizette Cabrera.

“I actually have a funny story,” smiled the 22-year-old when asked to describe her first experiences in tennis. “When I was being christened, one of the pastors said that they saw something big in my hand and my parents loved tennis, so they thought it was obviously a tennis racquet.

“So as soon as I could pick up a tennis racquet, they took me out and Dad hit with me every day.”

Those crucial first steps soon led to a local tennis club in her hometown of Townsville, where Cabrera formed a defining relationship with coach Wayne Hannah.

“He was a huge part of my career and he helped me take off,” said the Queenslander. “At 13 I went to the National Academy in Brisbane and everything kind of kick-started from there.”

If there were signs of a future in tennis when Cabrera was a baby, they were even stronger when she was a teenager. In 2011, she became a national champion alongside Priscilla Hon by claiming the Optus 14s Championships.

In a breakout 2016, Cabrera claimed ITF titles in Tweed Heads and Brisbane (reaching another final at Toyota in Japan) to soar more than 800 rankings places. A WTA main draw debut followed the next year in Brisbane and with two WTA quarterfinals appearances in 2017, Cabrera edged towards the world’s top 130.

Life on tour wasn’t without challenges, with the target of a top-100 breakthrough in 2018 creating some confidence-sapping pressure. But momentum dramatically shifted for the better in the second half of 2019, Cabrera winning three ITF titles and 26 of her last 34 matches to slash her ranking from No.272 in July to No.127 in November.

The 2020 season began with further success for the Queenslander, who stunned former world No.4 Caroline Garcia and the higher-ranked Kristyna Pliskova to reach a third WTA quarterfinal in Hobart.

“I’d say it’s one of the biggest wins (of my career). I’m super stoked that I got over the line." – @lizzycabrera97 #HobartTennishttps://t.co/IEP5W3I3d3

“I was happy to get a few top-50 wins. I had to work hard for those matches,” recalled Cabrera, who secured both upsets in three sets and extended Elena Rybakina (the eventual champion in Hobart) to another marathon in their quarterfinal.

“It was a really good test, but I thought I actually was really strong and gave myself the best chance.”

Rewarded with a peak No.119 ranking, Cabrera can also relate the more personal rewards that have come from tennis. Most special, undoubtedly, are the close friendships she’s developed with fellow players including Hon and Kimberly Birrell.

“I’ve grown up with them since I was 10. We all train together in Brisbane so I would say they’re like my top two closest friends on tour,” Cabrera explained.

There’s also an accessible role model in Ash Barty, who currently leads 12 Australian women inside the world’s top 250.  “With Ash being our No.1, it’s amazing. She’s so down to earth and I’m pretty grateful to train beside her in Brisbane,” said Cabrera.

“And yeah, it’s definitely inspiring with all the girls who are doing well this year.”

Cabrera’s initial goals for the 2020 season were simple. “I just want to keep improving. Little by little with the little things and also crack the top 100 and kind of keep going from there,” she related ahead of the Australian Open, adding that Fed Cup selection and overall improvement in form and fitness were other priorities.

While some of those plans were unavoidably thwarted through the tennis shutdown created by the COVID-19 crisis, Cabrera will almost certainly retain the attitude required to successfully navigate the interruption.

Who needs a 35kg dumbell when you’ve got your own chow chow? #stayathome pic.twitter.com/LejnEV6hUA

Down-to-earth perspective, she related, is common to many successful Queensland players. “I think we just have a really good set-up in Queensland. We’ve got great coaches, great facilities, awesome weather and I think we’re just really chilled out people but also very hardworking,” she said.

“We like to have fun at the same time, so we don’t try and take things too seriously.”

A silver lining for Cabrera is time at home with her family, which includes parents Ronnie and Maria, as well as her brother Carl and sister Izabo.

While her social media feeds since the shutdown have featured training videos – including one with her dog, Amiga (whose name translates to “friend” in Spanish) – the music-loving Cabrera has also dabbled with Tik Tok and enjoyed time engaging with other players.

Balance has long been a priority for the 22-year-old, who also participated in golf, basketball and touch football before her focus streamlined to tennis. “I think that’s also a really important thing for young girls. Especially when you’re still in school it’s good to do a lot of different sports,” she related.

“It’s good for injuries as well. I think my body has been really good because I did play a lot of different sports. It also takes the pressure off – when you’re so young and you don’t just focus on one thing.”

Cabrera believes a more relaxed approach is a critical element to her current success on tour. She admits that an intense focus on ranking and results earlier in her career at times became crippling.

“If you have a dream, just keeping going for it,” said the Queenslander, who is now delighted to continue a journey that began more than 20 years ago.

“I’m loving every minute of it. All the ups and downs. I’m so grateful to be doing what I’m doing.”