Australia’s top players are continuing a tradition of camaraderie that was famously established by their major-winning predecessors. 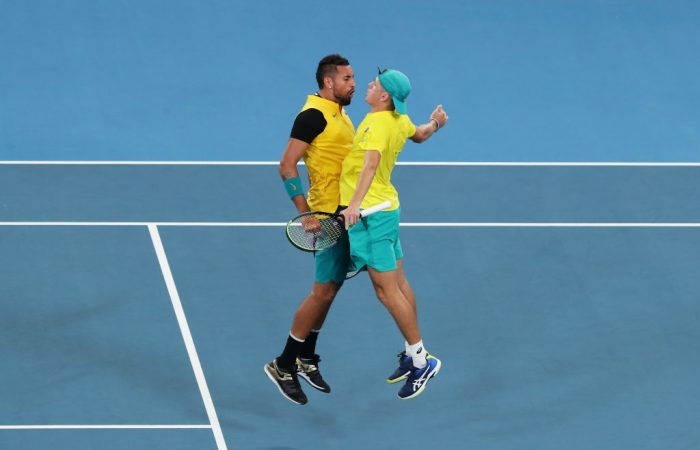 Support came from many places when an abdominal injury forced Alex de Minaur’s heart-breaking withdrawal from Australian Open 2020. But the deepest understanding may have come from the fellow Australian players who rank among the rising star’s closest friends on tour.

Nick Kyrgios is prominent among that group, continuing a connection with De Minaur that began in Davis Cup and grew stronger in the ATP Cup in the first weeks of the season.

“I’m just heartbroken for him. I know how much work he puts in. He’s probably been thinking about the Aus Open for the last couple months,” said Kyrgios, revealing the pair had caught up over a meal before De Minaur flew out of Melbourne.

READ: De Minaur checks in from isolation in Spain

“For him to have an injury that’s quite serious, it’s not going to be easy for him to watch the tournament, watch us, other Aussies, potentially do well.

“He’s our best player at the moment. He’s set such a good example for us. He’s a great role model.”

Daria Gavrilova, currently sidelined with a long-term foot ailment, has also discovered a similar support network after relocating from her native Russia to Australia. In 2013, the then-teenager suffered a serious knee injury while competing in Asia and subsequently underwent major surgery in Melbourne.

Gavrilova, who is engaged to fellow Australian player Luke Saville, recently told the Behind the Racquet website that important friendships helped her navigate those challenging circumstances.

“The first thing I did when I got to Australia was to have the surgery. My parents were very worried about me being on my own, in a new place and for the surgery,” Gavrilova related. “[But] I found a second family here with my best friends and my fiancé.”

Casey Dellacqua, who is often credited for her role in Ash Barty’s successful comeback after a break from tennis, notes the flow-on benefits of that supportive culture.

“The camaraderie in Australian women’s tennis is really great. I think that’s something to be really proud of,” said the now-retired Dellacqua while leading a group of rising female players at a training camp in Melbourne last December.

Lizette Cabrerra, who peaked at world No.119 after reaching a third WTA-level quarterfinal at Hobart in January, believes it’s an environment that not only enhances time on tour but can also benefit on-court performance.

“We all get along really well and we all push each other. I think it’s awesome that we’re all a great bunch of girls,” said the Townsville-born 22-year-old, whose close friendship group includes Priscilla Hon and Kimberly Birrell.

“It’s just a really nice vibe and I think we all do a really good job working together and pushing each other.”

Maddison Inglis, who set a new career high in early 2020 after a series of wins on the Australian Pro Tour, believes the supportive environment has helped her recent progress.

“Everyone is competitive, but they want each to do well,” she related. “Whenever we’re at the same tournaments everyone’s cheering on the girls.”

It follows a spirit of camaraderie that has long existed in Australian tennis. In the golden era of the 1950s and 1960s, it became a trademark of major champions including Frank Sedgman, Lew Hoad, Rod Laver, Ken Rosewall and Neale Fraser – many of whom often travelled together.

“What days they were. By the end of those trips, there wasn’t too much we didn’t know about each other,” Laver wrote in his memoir.

“It was an easy camaraderie we all shared, which ended abruptly when we faced each other on the court.”

“The camaraderie of the Australian tennis players of the golden era is rock solid,” she related in her 2016-released autobiography.

And so too is the mateship among today’s players. World No.1 Barty showcases the quality superbly, the Australian maintaining close connections with her idol Evonne Goolagong Cawley as well as Fed Cup team-mates and the many countrywomen with whom she’s trained or partnered in doubles.

Jessica Moore is among that group, Barty calling her on court as the fellow Australian retired from the sport at Australian Open 2020. While honouring Moore’s contribution to the game, the world No.1 was also showing how friendship provides its deeper meaning.

“This is what this sport’s about,” said Barty. “There’s nothing better than coming out with your mate and playing tennis.”

This article originally appeared in the April-May 2020 edition of Australian Tennis Magazine.