Joining the Australian Davis Cup team as an orange boy was a reward for impressive improvement from 19-year-old Tristan Schoolkate. 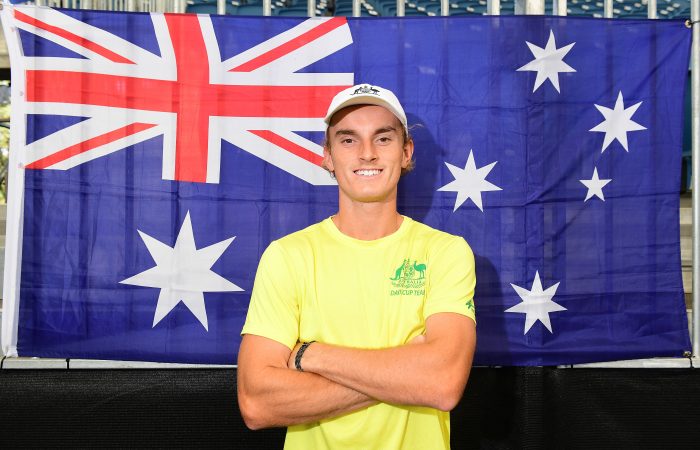 It has been a busy and memorable couple of months for Tristan Schoolkate.

The West Australian starred at the 2019 December Showdown, scooping singles and doubles titles in the 18 and under section. That performance earned him a wildcard into the AO Play-off, where Schoolkate upset second seed Andrew Harris in the opening round. His first five-set victory was also his first over a top 200-ranked opponent.

He began the 2020 season as a hitting partner at the ATP Cup in Perth, sharing the practice court alongside top-ranked players from teams including Russia and Italy. It proved great preparation for the Australian Open, where Schoolkate received a wildcard into the men’s singles qualifying draw.

“It was my first Slam. I played a pretty good match and lost a close one in the third set,” said Schoolkate, who lost to world No.143 Juan Pablo Varillas 7-5 in the deciding set.

“It was a great experience and hopefully there’s more to come.”

These impressive efforts caught the attention of Australian Davis Cup captain Lleyton Hewitt, who invited the 19-year-old to be the orange boy for the qualifying tie against Brazil in Adelaide last week.

“It’s pretty special for me,” Schoolkate said of the experience. “To get the call-up and be there with the guys was really fun.”

Schoolkate relished the opportunity to hit with Australia’s top-ranked men and learn from esteemed mentors such as Tony Roche and Hewitt.

“Having them on court when you’re training, as well as training with some unreal players, has helped me a lot,” Schoolkate said. “It’s been great.”

“To get the call-up and be there with the guys was really fun.”

Joining the Aussie #DavisCup team as an orange boy was a reward for impressive improvement from WA’s Tristan Schoolkate 👉 https://t.co/UQZo4ohpJq pic.twitter.com/R9VtHxCSV0

The Australian Davis Cup team has a longstanding tradition of inviting first-time orange boys to undertake a public initiation on the eve of a tie.

Schoolkate made his rookie speech at a pre-draw function, where he playfully compared his teammates to famous Australian foods. He likened Aussie captain Lleyton Hewitt to an ANZAC biscuit and James Duckworth to a meat pie.

“I was a little bit nervous, but I think I prepared it pretty good,” Schoolkate said of his speech.

“From what I was hearing with the laughter, I think it was okay. Everyone I think liked it, so I’m glad it went well.”

After playing a supportive role in Australia’s 3-1 victory against Brazil, Schoolkate now turns his attention to the Australian Pro Tour. He is competing in the City of Greater Geelong Tennis International on his favourite grass surface this week.

“I’m trying to build my ranking and play the Futures this year,” Schoolkate said of his 2020 plans.

A top-400 breakthrough is his target in his first full season on tour, hoping to half his 2019 year-end ranking of No.866.

Still, the driven 19-year-old recognises that progress is measurable in many ways.

“One of the best things I’ve probably ever been told is from my dad. He said tennis is a game and you’ve got to enjoy it. If you don’t enjoy it, don’t play,” Schoolkate said.

“I’m always trying to have fun on court and to love every bit of it.”