With top seed Dayne Kelly and qualifier Scott Puodziunas defeated in Mildura singles action, it was left to Thomas Fancutt and Jeremy Beale to claim the doubles title for the locals. 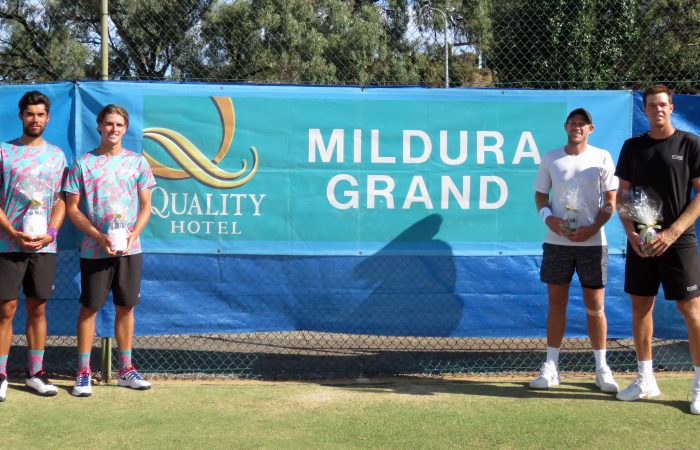 Runaway qualifier Scott Puodziunas was stopped in his tracks by Japan’s Rio Noguchi in the Mildura Grand Tennis International semifinals on Saturday.

After upsetting seeds Luke Saville (No.2) and Thomas Fancutt (No.6) on his way to the last four, the 30-year-old Queenslander’s power game was unable to make a dent in the consistency of the fourth seed and world No.412, and he succumbed 6-3 6-1 in just over an hour.

Ensuring a distinct lack of Aussies on the final day, British third seed Bryden Klein then dispatched local Victorian – and top seed – Dayne Kelly, also in straight sets, 6-3 6-3 to set up the final against Noguchi.

Doubles specialist Puodziunas then returned to his chosen craft, where he partnered Klein to take on Fancutt and Victorian Jeremy Beale in the doubles final. However, it wasn’t to be, as the top seeds fell 4-6 7-6(6) [10-3] despite holding a match point in the second set.

“We’re kind of picking up where left off,” Fancutt, 25, said after taking the title. “Jeremy’s been out for a pretty significant amount of time with injury, so it’s pretty good to get back on the court with him.”

“We’ve played these guys a couple of times now, and it’s always a battle, so I’m super pumped to get through it today,” he added. “They’ve got a lot of experience and they’ve won a lot of matches to be at the doubles ranking they are.”

“Scott got me in singles as well, so it was nice to get him back.”