Despite a gallant effort from Aussie pairing James Duckworth and John Peers, Brazil claim the doubles in the Davis Cup qualifying tie in Adelaide. 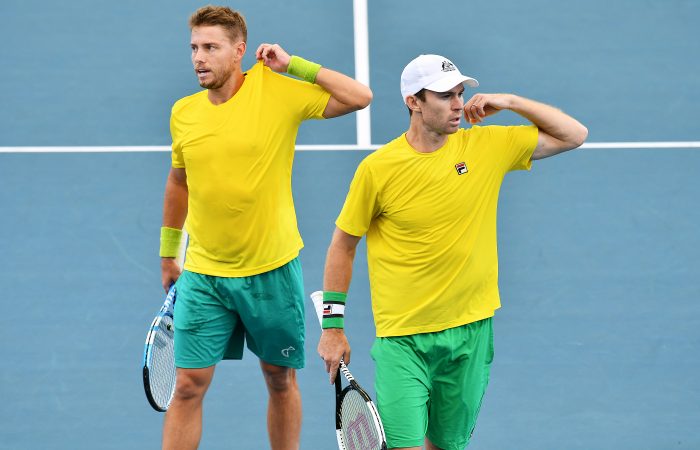 Brazil has kept its hopes alive in the Davis Cup qualifying tie against Australia in Adelaide, clinching a must-win doubles rubber in a final-set tiebreak.

“I thought we had chances,” Peers said. “But at the end of the day if you don’t quite take your chances when you have them, things slip away like they did.”

Brazil served for the opening set at 5-4, having broken Peers’ serve in the seventh game. However, Duckworth and Peers lifted to win 14 of the next 17 points and take the opening set.

“There were lots of ebbs and flows,” Peers said. “I thought we got out of the first set when we probably should have lost it.”

The Australian pair, playing together for a first time, could not maintain that momentum though. Brazil built a 3-1 lead in the second set, heaping the pressure again on the Australian team.

Supported by a fervent crowd, debutant Duckworth and Peers broke the Demoliner serve to love in the sixth game and edged ahead again with a run of three consecutive games.

Tensions rose late in the second set, heightened by a run of long games. The Brazilian team scored a crucial break in the 11th game and then closed out the set to love on the Meligeni Rodrigues Alves serve.

Games went on serve early in the deciding set. The Australians struck in the sixth game to move ahead 4-2, but were unable to consolidate the break with Peers dropping serve in the following game.

A tiebreak decided the match – and that too delivered more momentum swings.

The Brazilians streaked ahead 6-2. Then the Australians sensationally saved four match points, the first with a successful challenge that ruled a Demoliner cross court forehand wide by mere millimetres.

A fifth proved too much, with Brazil clinching victory to reduce Australia’s lead to 2-1 and force a live reverse singles rubber between John Millman and Thiago Monteiro.

“I felt like after that break in the third we were looking pretty good, but it came down to two points in the end. It was tough,” Duckworth admitted.