Australia will play Belarus and Belgium in Group B at April's Fed Cup Finals in Budapest, with the second seeds aiming to go one better in 2020 after reaching the 2019 final. 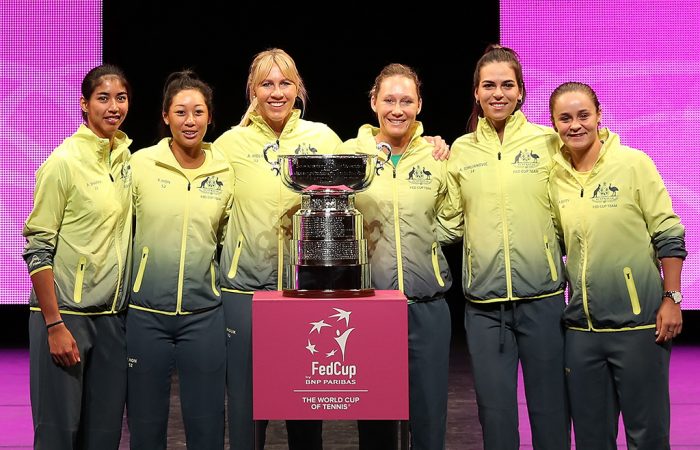 Last year’s Fed Cup finalists Australia have been drawn against Belgium and Belarus in the group stage of the 2020 Fed Cup Finals to be played in Budapest from 14-19 April.

Twelve nations will compete in four groups in the first version of the revamped women’s team competition which has followed the men’s Davis Cup in moving to a one-week multi-nation showdown in one city.

The draw was made at a glittering ceremony at the Museum of Fine Arts in the Hungarian capital on Tuesday, with Alicia Molik’s Australian team the seeded country from Pool B as last year’s beaten finalists.

Australia’s bid to win the prestigious inter-nation event ended in a heartbreaking 3-2 defeat to France in Perth in November but ensured they would automatically qualify for the year’s finals.

Australia beat Pool B opponents Belarus, ranked fifth in the world, 3-2 in a thrilling Fed Cup semifinal in Brisbane last April. It is the only previous meeting between the two nations.

Australia and Belgium have clashed eight times, with the Aussies leading the series 5-3. However, Belgium won the last three (from 2000-2002), with Australia’s last victory coming in 1984.

Belarus reached the Fed Cup final in 2017 and their star player Aryna Sabalenka is ranked 13th in the world.

Belgium, ranked 12th, won the tournament for the only time in their history in 2001.

World No.19 Elise Mertens will be expected to lead their charge in Budapest, after winning both of her singles rubbers to help Belgium to a 3-1 win over Kazakhstan in the Fed Cup qualifiers stage of the competition at the weekend.

Sabalenka defeated Arantxa Rus yet lost to Kiki Bertens in her singles rubbers over the weekend before teaming with Aliaksandra Sasnovich to deliver Belarus a 3-2 win over Netherlands in The Hague.

Titleholders and top seeds France have been drawn into Pool A with Russia and Hungary while 18-times Fed Cup champions United States will face Spain and Slovakia in Group C. Group D will feature Czech Republic, Germany and Switzerland.

The main change for the revamped set-up was the formation of a new World Group, with countries fighting it out at one location and in one week – this year in Budapest.

Earlier on Tuesday, the draw to see who takes part in next year’s Fed Cup qualifiers was made in London.

This play-off draw includes those nations who lost in their qualifying matches at the weekend. The play-off winners will get the chance to qualify for the 2021 Finals.

(to be played home and away)