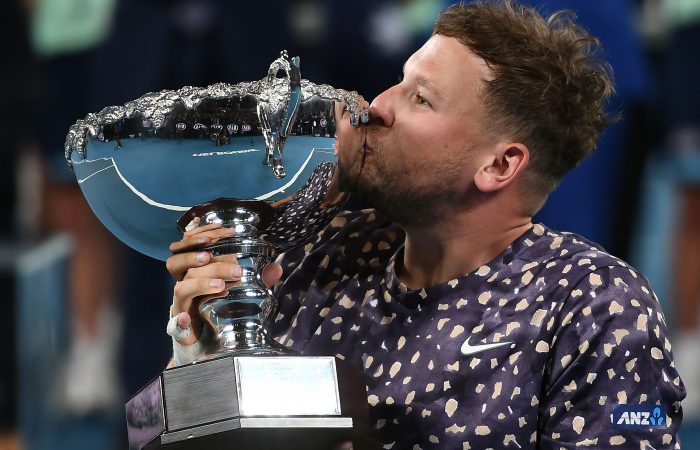 “That was the best I played,” said Alcott, who took an hour and 15 minutes to record the 6-0 6-4 victory. “The first set, best tennis I ever played. Big match on TV, big crowd. I was really happy with how I played.”

The finals success marked a fourth consecutive singles win this week for Alcott, who was also a winner of each match in the round-robin stage. Defeating Lapthorne, American David Wagner and countryman Heath Davidson, he did not drop a set for the tournament.

This one meant the most. 6 x AUSTRALIAN OPEN CHAMPION! I love every single one of you. Thank you from the bottom of my heart xx #ausopen pic.twitter.com/l0Pxd2VAgv

There was added motivation in the flawless 2020 performance, Alcott admitting he was “gutted” when he lost the 2019 US Open final against Lapthorne after earlier winning the Australian Open, French Open and Wimbledon titles.

“I was pretty devastated,” said Alcott of failing to complete the calendar-year Grand Slam. “Hated myself, hated tennis a bit. I really worked hard on myself since then.”

The work showed in the final against Lapthorne, as a high-intensity Alcott took a 6-0 lead against the Brit in just 31 minutes.

Showcasing superb touch and control, the Australian later withstood a challenging second set, which began with two consecutive breaks of serve for both players.

While Alcott and Lapthorne each settled into a rhythm of sorts, it was the defending champion who gained the ascendancy with another break of serve in the ninth game. He consolidated to secure victory in the following game, after Lapthorne unsuccessfully challenged a point mid-rally.

“Shout out to Hawk-Eye, whoever invented that,” said a smiling Alcott. “Poor guy. As soon as he did it, he knew what he had done. He was having a laugh at that, which was nice.”

“It was the best finals we’ve had here and I really enjoyed it,” he said.

A 10th Grand Slam singles title overall, the 2020 victory adds to a special relationship Alcott has established with both the sport and his home major.

“Tennis honestly saved my life, it really did when I was younger,” Alcott related in the trophy ceremony.

“And the Australian Open single-handedly changed my life. It really has. It’s the most inclusive of the Grand Slams – to be able to back us to come out here and put on a show, live on TV all around the world, in front of this unbelievable crowd.

“I love every single one of you for supporting what we do.”

"I can't thank you enough."

The generous outlook was accompanied by a generous gesture from Alcott, who promised to donate $100 for each ace he served at the Australian Open to bushfire relief efforts. With that pledge matched by his sponsors, Alcott related that the $40,000 would be directed directly to people with a disability impacted by the bushfires.

“Obviously all Australians losing their houses and things like that, if you magnify that and times that by having a disability where you then have to retrofit your house again and all that, it’s pretty gnarly,” said Alcott.

“Hopefully some people got to watch it today and put a smile on their face. I can’t compare or understand the pain that it caused. So anything we can do to help, that’s what we wanted to do.”

For Alcott, there was pure joy in securing another home title, the Australian noting that a positive mindset is the biggest driver in his 2020 season.

“Whether it’s media, the work with the Dylan Alcott Foundation, public speaking, when I’m happy I perform best. I’m happy at the moment, I really am,” he said.

“I have a great family, great team. Awesome crowd. On TV. Everything is going so well. I really try to embrace all that as opposed to put it aside. I’m really stoked. The expectation, I used to have an expectation to win. I have a goal to win. Now my expectation is to just be the best version of Dylan.”

“Shout out to Ash for doing so well and to Nick (Kyrgios) and to (John) Millman and to the boys in the doubles,” beamed Alcott.

“Australian tennis is doing so well at the moment.”