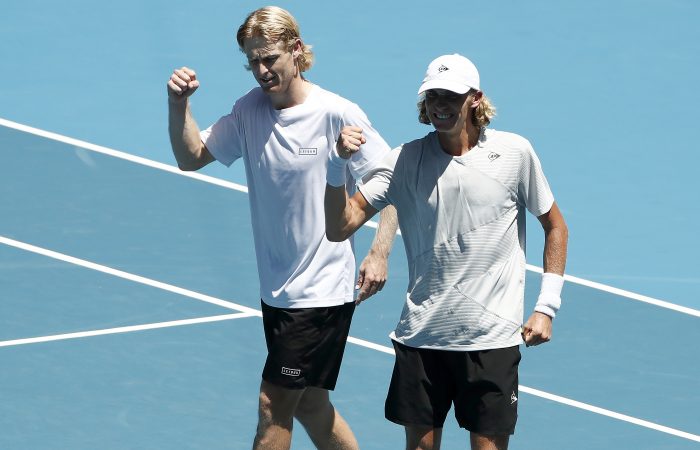 Max Purcell and Luke Saville are within one victory of becoming the first all-Australian pairing in 23 years to lift the Australian Open men’s doubles trophy.

Purcell, a 21-year-old from New South Wales, and Saville, a 25-year-old from South Australia, have won eight ATP Challenger doubles titles in the past 13 months. Competing in their third Grand Slam together, this is the first time they have advanced beyond the second round.

“Max and I have performed on the Challenger circuit and never really had a real crack at a Grand Slam, and now we’re sitting in a final … we’re just thrilled,” Saville said.

The Australian duo will face No.11 seeds Rajeev Ram and Joe Salisbury in the final after the American-British pairing edged Kazakhstan’s Alexander Bublik and Mikhail Kukushkin 4-6 6-3 6-4 in the other semifinal.

“Nothing really beats the finals of a Grand Slam,” Purcell said. “We’re playing great, we’re connecting, I think we’re getting better every match, and we’re just enjoying you guys coming out and supporting us. We really feel it out here.”

Mark Woodforde and Todd Woodbridge were the last all-Australian pairing to reach an Australian Open final in 1998.

If Purcell and Saville win the title, they would be the first all-Australian champions since the Woodies in 1997.