Barty blocking out the hype as hopes rise at Australian Open

As hopes rise for a first home-grown Australian Open champion in 42 years, Ash Barty is maintaining her focus on today's quarterfinal against Petra Kvitova. 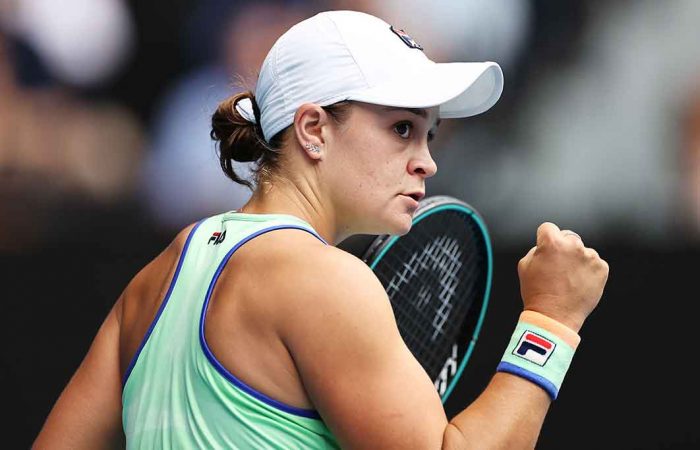 Ash Barty is ignoring the hype as she battens down the hatches ahead of the sternest test yet in her bold bid to accomplish one of the most elusive feats in tennis.

The world No.1 must avenge last year’s straight-sets quarterfinal loss to Petra Kvitova on Tuesday to keep her Australian Open dream alive at Melbourne Park.

Much has been of Barty’s pressure-filled quest to become the first home-grown Open champion in 42 years, but it’s not just Australia that has proven burdensome for players trying to win their home slam.

No British woman has won Wimbledon in 42 years either, while 2000 French Open champion Mary Pierce is the only Frenchwoman to have reigned in Paris in more than half a century.

Home Grand Slam triumphs have been even harder to come by in men’s tennis, with Andy Murray breaking a 77-year curse at the All England Club in 2013 and Yannick Noah in 1983 the only Frenchman to win at Roland Garros since World War II.

Mark Edmondson in 1976 remains the last local man to win the Australian Open, while Chris O’Neill claimed the women’s title in 1978. Even Barty admits it’s a different beast altogether trying to lift the trophy on home soil.

“It could be cold, raining, roofs closed. All these variables that come into it.

“It’s just about trying to do the best you can on that given day.”

Barty has endured a rollercoaster ride through the first week, fighting back from a set down in her opener against Lesia Tsurenko, then comfortably seeing off Polona Hercog before delivering a third-round masterclass against dangerous youngster Elena Rybakina.

The top seed had to survive a fierce fightback from Alison Riske to avoid crashing out in the fourth round at the hands of the American like she did at Wimbledon last year.

“All you can try and do is put your best foot forward, regardless of you’re playing in Australia or all around the world.”

After losing her first four meetings with Kvitova, including last year’s quarter-final 6-1 6-4, Barty has won their past three encounters – all in 2019, most recently en route to the title at the prestigious WTA Finals in Shenzhen in November.

“It’s never an easy match. I think maybe all but one have gone to three sets.

“I’m looking forward to another battle against a quality opponent.”