Fifty years since Margaret Court won the first of 11 Australian titles and went on to win a calendar-year Grand Slam, the golden anniversary was marked at AO 2020. 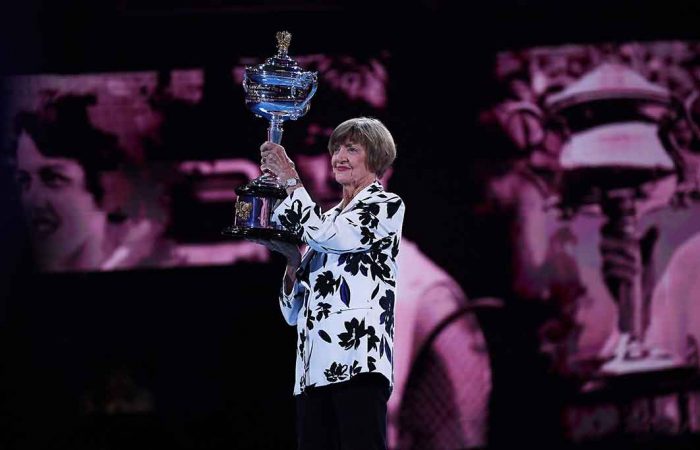 There were 64 Grand Slam titles to celebrate when Margaret Court ended one of the greatest sporting careers in Australian history.

Twenty-four of those titles were in singles, Court’s trophy cabinet further bolstered by 19 women’s doubles victories and 21 more in mixed.

It’s doubtful, though, that any of those major victories meant more to the Australian than the four she collected in 1970.

Defeating Kerry Melville in the Australian Open final, Helga Niessen in Paris, Billie Jean King at Wimbledon and Rosie Casals at the US Open, Court became one of the few women in tennis history to claim a calendar-year Grand Slam.

It was one of many career milestones for the Albury-born Court, who was the first Australian woman to claim a Grand Slam outside the nation with victory in the French and US Championships in 1962.

In 1963, Court (then Smith, before her marriage to Barry Court in 1967), was Australia’s first female player to triumph at Wimbledon.

“I loved playing for my nation and representing my nation. When I won Wimbledon, it wasn’t for me – it was for my nation,” said Court, still emotional at the memories many decades on.

“That still brings tears to my eyes.”

Such achievements were helped by a remarkable work ethic, with Court’s commitment to fitness and strength training setting a benchmark for many other female players.

As a teenager, Court trained at the Melbourne city gym owned by Frank Sedgman. “I think I was often very hard on myself,” said Court.

“I was a workhorse. I used to think I had to practice more and train more to improve.”

The Australian great certainly did that, accumulating many magical milestones – including four Fed Cup titles for Australia – before her 1977 retirement.

Securing the rare calendar-year Grand Slam in 1970, though, came down to the mindpower Court displayed when she became locked in a three-set battle with Casals in the US Open final.

“Tennis is a game where you can be physically (better) or have so much better game but it’s the mental side of it and often that’s where the battle is won,” she said.

Fifty years on, that rare achievement remains a high point in the tennis record books and with the memories still strong, Court treasures the golden anniversary.