With a three-set win over the dangerous Alison Riske, Ash Barty moves into the Australian Open quarterfinals for a second straight year. 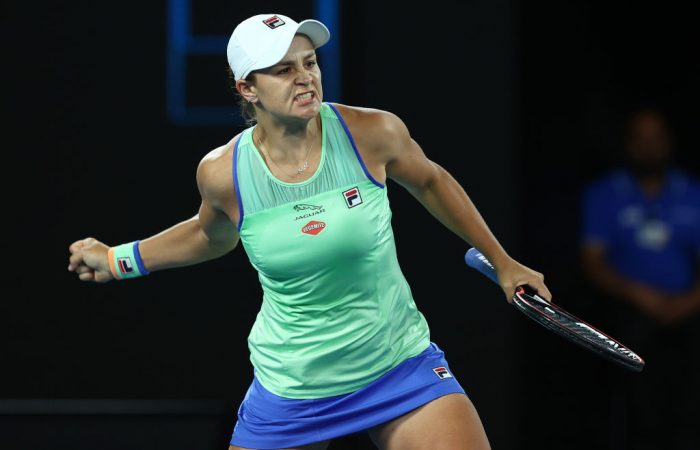 Ash Barty has set up an Australian Open quarterfinal rematch with Petra Kvitova with a 6-3 1-6 6-4 win over Alison Riske.

The world No.1 battled back from an error-riddled second set to ensure a repeat of her 2019 last-eight match against the Czech seventh seed.

"I love Petra, but let's hope she doesn't break my heart on Tuesday."

Barty raced out of the blocks to set up a 3-0 lead with a break and two service holds before Riske got the match back on serve.

But the Queenslander broke again and served out the set.

Barty’s mistakes started to mount in the second, the 2019 French Open winner ultimately hitting 12 unforced errors to her opponent’s four.

As the winds picked up, the set proved just as breezy for the American who secured a double break to take it out in 27 minutes.

“It was very tough from different ends, playing very differently. But I just had to hang in there, try and give myself a chance,” Barty said.

“I struggled tonight, but was able to get big holds I needed.”

Unlike their Wimbledon clash last year, which Riske won after losing the first set, Barty found her range early in the decider, securing a 4-1 lead.

It wasn’t to last.

Serving into the wind continued to pose problems and Riske got the match back on serve with a break in the seventh game.

The match had one more twist however, as Barty secured the decisive break at 5-4 when Riske double faulted on match point.

With the win Barty becomes the first Australian woman since Wendy Turnbull in 1984 to make back-to-back quarter-finals in Melbourne.

Kvitova beat Barty comfortably when they met at the Open last year – but a lot has changed since then.

Barty won at Roland Garros, became the top player in the world and rattled off three wins over Kvitova in nine months to leave their career record at 3-4.

“I love Petra (but) let’s hope she doesn’t break my heart,” Barty said.