Former world No.4 Sam Stosur and wildcards Lizette Cabrera, Andrew Harris and John-Patrick Smith bow out in the first round of Australian Open 2020. 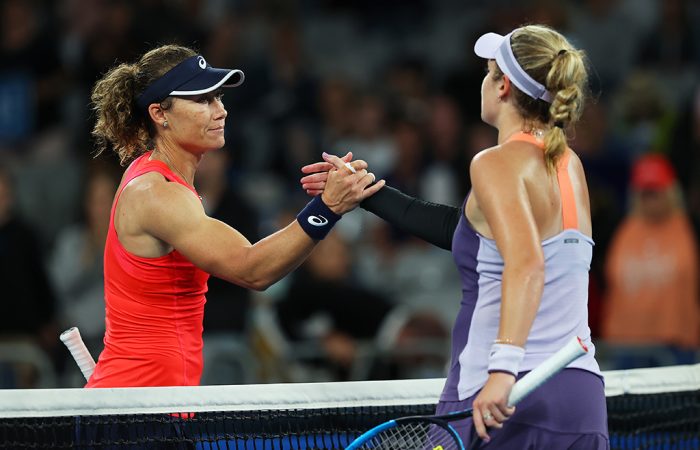 Stosur had no answer to the talented 18-year-old, going down 6-1 6-4 to a player who had won three matches in qualifying to take her place in the main draw.

RELATED: Barty back in business at Australian Open 2020

Former US champion Stosur, who is now ranked 99, was hampered by 39 unforced errors which effectively brought undone her 18th Melbourne Park appearance.

Stosur had a chance to get back into the match in the second set, breaking back and then levelling at 4-4.

But McNally held serve before breaking the 35-year-old again to take the victory.

Earlier, Harris, the world No.162 and a wildcard entry after an impressive 2019 which saw him climb more than 200 places in the world rankings, was understandably nervous against No.8 seed Matteo Berrettini at Melbourne Arena.

It was the 25-year-old’s first Grand Slam main-draw match and his first encounter against a top 10 player and he struggled to live with Berrettini’s powerful baseline game, going down 6-3 6-1 6-3.

Smith was making his first main-draw appearance at Melbourne Park since 2013. The 30-year-old was outgunned by the feisty Argentine No.22 seed Guido Pella, going down 6-3 7-5 6-4.

Cabrera entered Australian Open 2020 after an impressive run in Hobart last week which saw her take out Caroline Garcia and Kristyna Pliskova en route to the last eight.

However, in her third appearance in the women’s singles main draw at Melbourne Park, she lost a desperately tight match to qualifier Ann Li, going down 7-6(4) 7-6(10) before a vociferous crowd on Court 3.

With fellow Aussie Maddison Inglis cheering her compatriot on from the stands, Cabrera looked set to level the match when she took a 5-2 second set lead but saw it slip away as the durable, tenacious Li fought back.

The 22-year-old Queenslander continued to battle hard, saving five match points with some courageous hitting in an epic tiebreak, but was unable to force a decider as Li ultimately prevailed.

“I was pretty disappointed with today’s match,” Cabrera told AAP.

“I did have a lot of opportunities. Ann’s a good friend, she played really well and was braver in the bigger moments.

“But I’m still happy with the way I competed and fought even though it wasn’t my best tennis.”

In a concurrent match, fellow Australian wildcard Max Purcell led Italian teenage star Jannik Sinner 5-3 in the first set before Sinner recovered to win it in a tiebreak.

The match was suspended due to rain with Sinner leading by two-sets-to-love and with scores locked at 4-4 in the third.