The 21-year-old from Sydney defeats Slovakian Josef Kovalik in straight sets in the final round of Australian Open 2020 qualifying. 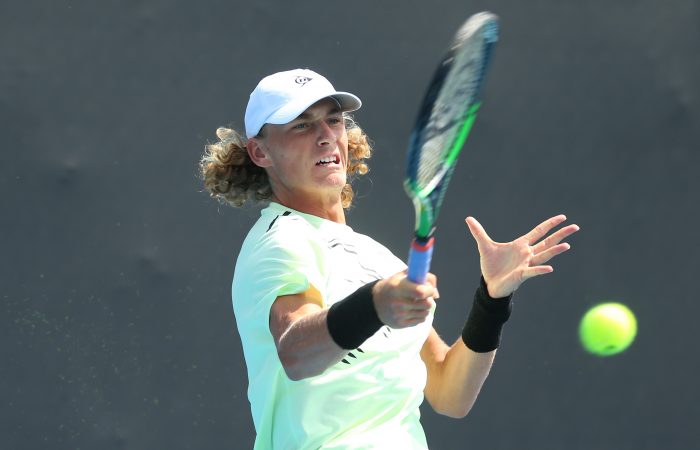 Max Purcell has qualified for the Australian Open main draw.

The world No.216-ranked Purcell sealed his Grand Slam debut with a 6-4 6-2 win over No.26-seeded Slovak Josef Kovalik in the final round of qualifying today.

“It’s a great feeling,” an emotional Purcell said of what the win meant.

“I’ve always been thinking ‘I think I’ll make one’, but with every Slam that goes past and you don’t, you’re just like ‘will it ever happen?’ This is, just, wow. Such a relief. Especially to do it in my home country.”

Purcell, a finalist in the AO Wildcard Play-off last month, credited his major breakthrough to a more disciplined approach.

“The last two or three months I’ve really felt like I’ve lifted a bit,” the 21-year-old from Sydney said. “I’ve been really taking care of my diet, my fitness, all the one per-centers … I guess it’s all paying off.”

Hitting seven aces in his 72-minute victory, Purcell dictated the match against his No.138-ranked opponent.

“Luke and I play doubles together, so I’m with him almost every week of the year and we’re great mates. It was shattering to see him lose, so I thought I owed it to him to get a win today,” Purcell said.

With his confidence rising, Purcell can’t wait to make his Australian Open debut.

“I’ve beaten some guys already in the main draw, so I’m not too far off it,” he said. “I’m just going to treat it like any other match.

“I’ll have the crowd behind me on Monday or Tuesday, and I’m just going to give it everything.”

MAGNIFICENT MAX.@MaxPurcell98 qualifies for the #AusOpen main draw with a 6-4 6-2 win over 26th seed Jozef Kovalik.

There are now 11 Australian men in the #AO2020 main draw!#GoAussies pic.twitter.com/5oHxGBBudJ

Aleksander Vukic will aim to join them when he contests his final qualifying match tomorrow.

Rinky Hijikata’s qualifying run is over though, beaten in the second round today by the Netherlands’ Tallon Griekspoor 7-5 7-5.

Destanee Aiava is the sole Australian woman left in qualifying. She plays her final round match tomorrow.