Ash Barty will face Dayana Yastremska in the Adelaide International final, after a fighting win over Danielle Collins. 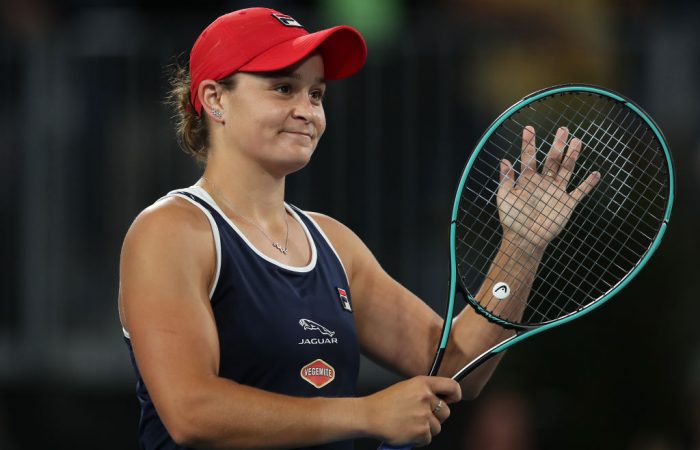 World No.1 Ash Barty survived an almighty semifinal scrap to advance into the title decider at the Adelaide International.

The Australian came from a set down to pip gallant American Danielle Collins 3-6 6-1 7-6(5) at Memorial Drive.

Barty will meet world No.24 Dayana Yastremska in the final after the 19-year-old Ukranian conquered Belarusian Aryna Sabalenka 6-4 7-6(4) in the other semi.

"That was a lot of fun… you guys have brought a little bit more enjoyment back into my tennis" 🙃@ashbarty thanks the sellout crowd for their support #AdelaideTennis pic.twitter.com/W9vs6FEiB2

Barty’s path to the final was far from smooth: she was shaky in the first set; sheer brilliant in the second; then prevailed in a nerve-jangling tiebreak in the third.

Collins, the world No.27, suffered an untimely back injury in the final set but was courageous in defeat.

The American held her first service game, the match-opener, to love; then immediately broke the Australian’s serve.

The shaky start prompted a shake of the head from Barty’s coach Craig Tyzzer, who sensed what was coming: an American steamroller.

Barty did have a chance – three of them precisely – to break back in the seventh game but the Collins promptly won the next five points en route to emphatically taking the set.

But Barty did as Barty does when in a predicament: Ash, in a flash, morphed from misfiring to all guns blazing.

The Queenslander was simply superb in sweeping the initial five games of the second set, which she claimed in 28 minutes of sustained brilliance.

The deciding set was punctuated by a medical timeout when Collins, up 2-1, sought treatment for a back injury.

Soon after resuming, Barty made her move, breaking Collins’ serve in the seventh game with a thunderous down-the-line forehand.

But the plucky Collins instantly broke back and games went on serve until the tiebreak, when Barty edged clear.

.@ashbarty gets the hard fought win over Collins!

Her win creates an enticing final against Ukraine’s Yastremska, who pledged all-out aggression as she chases a fourth WTA title.

Yastremska has met Barty once before, a straight-sets win to the Australian last year in Miami.

“I had a good preseason, I worked on a lot of things and I think that’s paying off … each game, I’m playing better and better,” Yastremska said.

The unseeded Yastremska blasted 28 winners compared to sixth-seed Sabalenka’s 17 in a deliberate ploy to counter the Belarusian’s renowned firepower.