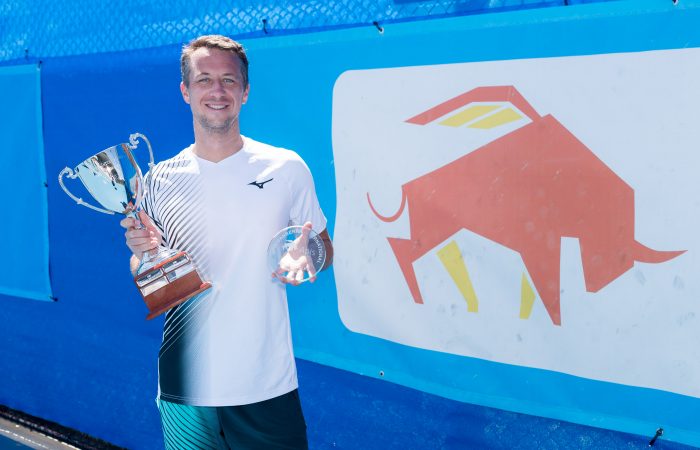 Kohlschreiber secured a hard-fought victory over Finn Emil Ruusuvuori 7-6 (5) 4-6 6-3, while Frech was crowned the women’s champion after top seed Patricia Maria Tig of Romania was unable to take to the court due to a foot and calf injury.

The men’s final was a battle of the generations, with 20-year-old rising star, Ruusuvuori, up against one of the most experienced players on the ATP Tour, in Kohlschreiber.

Kohlschreiber eventually held the young Finn at bay over the three sets, the world No.79 saying it was a great way to start 2020.

“I am very happy, playing the first tournament of the new season. It is the best start I could imagine,” he said. “It was a very tough tournament. Tricky conditions. I think we both played a good final, but I think maybe my experience helped me out today.”

36-year-old Kohlschreiber, a former world No.16, credited a solid off-season for his fast start after struggling with some injuries in 2019.

“I had to work very hard to get fit again, so this is the best payout you can have. I am very lucky, and I think I am playing really good tennis. Of course, the win this week was very nice leading into the Australian Open,” he said.

Earlier in the day, Frech was crowned champion, claiming her fourth ITF World Tennis Tour title.  The 22-year-old was in solid form all week in Bendigo and did not drop a set on her way to the final.

Australia was well-represented in the winner’s circle with all-Aussie pairings Luke Saville and Max Purcell, alongside Canberra local Alison Bai and Jaimee Fourlis, taking out the men’s and women’s doubles titles respectively on Saturday.