Storm Sanders' comeback to the singles sphere in the past two months was a resounding success, setting her up for an assault on the game in 2020. 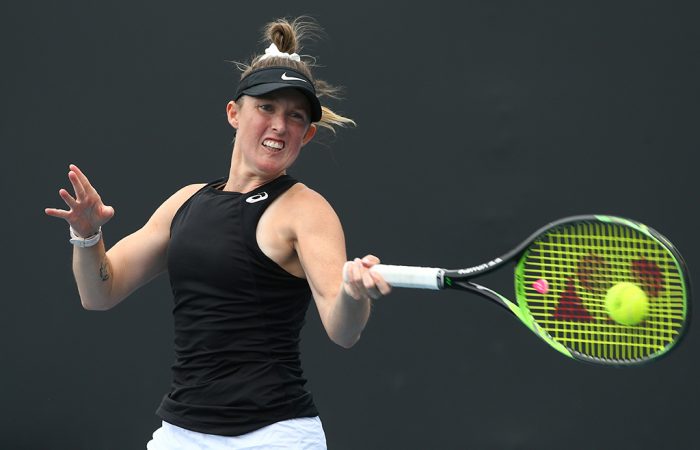 Storm Sanders’ return to the singles game in late 2019 was one of the more heart-warming stories in Australian tennis.

The 25-year-old left-hander, who has not played a singles event since November 2017, reached the quarterfinals in her first tournament back in Bendigo in October before going all the way to the title the following week in Playford.

Sanders, who in recent years has suffered shoulder, elbow, back and ankle problems, is back up to No.378 in the world after winning 15 of her 18 singles matches.

Three of those four wins came in the recent Australian Open Play-off, where she reached the final before falling to Arina Rodionova.

We caught up with Sanders during her successful week at Melbourne Park.

Tennis.com.au: In four events so far, you’ve barely lost. Given you didn’t play for singles for two years, how amazing is it to come back to the court and have instant success?

Storm Sanders: “It’s pretty crazy to be honest — I was not expecting that at all. I made the decision, maybe around August, to come back and play singles in November, basically. So I was playing practice sets and what not; I knew I was hitting the ball well, but playing matches is very different, having that pressure and stuff. I think I’ve just been better at staying calm and just more mature on the court. It’s a game of tennis and I’m just trying to be the best that I can and not worry so much about my opponent and the results. It’s just going out and playing each ball on its merit and I think I’ve been doing that really well and I think the results show that, that I’ve probably matured a little bit as well.”

Was the reason for your singles comeback simply because your body was healthy?

“I wasn’t planning on playing singles when I first came back. I also had my protected ranking for doubles which was about 66, so I wanted to try and use that and try and get my doubles ranking as high as possible. I honestly didn’t know if I was going to play singles again, just because of my body. I just wanted to play consistently on tour, whether that’s singles or doubles or both. But my body was feeling good, I was playing a few random singles points here and there, and I had some family and coaches say, oh, have you thought about playing some singles?”

It’s one thing that your body is feeling OK, but was it that people said to you: you’re actually hitting the ball really well Storm, you should try for a comeback? Is that what precipitated it?

“I always thought maybe I could play singles, but when some coaches and my boyfriend and my parents were like, Storm, you’re hitting the ball unbelievable, you’re moving well, you’re fit and healthy, so why don’t you give it a go? When a few people were saying that, I was like, OK, I’m going to do it.”

With the physical problems you’ve had, do you get nervous playing singles now, and wonder if your body is going to break down again? How do you approach that psychologically?

“I would say probably in Bendigo, yes (I was worried about how my body would hold up). Because I wasn’t sure with the loading, because I was winning as well — I was having to back up matches. If I lost first round, I would know how I’d feel after one match. But to play five matches that week… by my fifth match against Lizette (Cabrera) in the quarters like I was pretty cooked. But my body felt fine, so I knew that was a positive thing.

“Now I don’t even think about it — I think if you do too much, then it can actually have an effect on you. But obviously it’s hard not to think about it sometimes. I think I’m a lot calmer now on court than I was — I’m not as tense as when I was younger. I think that also helps my body too. Just focus on my breathing and just really doing all my rehab, making sure I do the proper cool downs, warm-ups, just taking care of everything so I know that I’ve given myself the absolute best chance on court.”

What do you think has helped with that calmness?

“I think the biggest thing for me was when I started coaching last year, when I was injured. I did my junior development coaching course and started coaching every night, at all different age groups. It let me see the game in a different way; instead of being so emotional and involved with yourself and how you feel, what happens to me if I win or lose, it was actually instead: ‘this is a tennis match … you hit forehands, backhands, volleys, serves, it’s not so much an emotional game’. It’s more, this is (how it is) tactically and you try and get the emotions away from the game, I guess, and just see it for the game it is.

“I watched a lot of my footage as well, how I played, and just saw things. I wanted to have a really good idea of what I was doing and I’m even just using my coaching skills as well now to kind of coach myself, so I think that helped (laughter).

Who is your coach now? And who else is in your entourage?

“Me, I’m my coach (laughter). But I get help from Pratty (Nicole Pratt), Colin Ebelthite, guys from National Academy Victoria, I get a lot of support. So I’m very lucky if I need feeding or advice and stuff, I get that. But when I’m away, it’s me, basically.

You nearly cracked the top 200, almost six years ago. I know that’s a long time ago — how different are you as a player now? Would Storm Sanders today beat the Storm Sanders ranked No.202 in 2014?

“Yeah I know, that’s scary (smiling). I think my ball striking’s always been quite big, I guess. And I think that’s probably stayed the same (over the years). I’d say I have more variety with my serve, definitely returning, more consistent in general, and not going for so much. Still being aggressive, but being aggressive with the right ball, and not trying to hit lines or finish with a winner. Happy to stay in the point.

“I think that’s also because I had a year off and I was doing a lot of fitness because I couldn’t hit with my shoulder. But I did a lot of running, bike sessions, and movement and stuff. So I think that helped me get fitter so I felt like I didn’t have to finish the point early, I could stay in the point and rally and be more consistent.

“And I think I’m smarter now too — I hope so (laughter) — on court. I’ve had a lot of experience, played a lot more matches … just trying to figure out how to beat the opponent with what I have and understanding my strengths and weaknesses a lot better. So I think 25-year-old Storm would beat 19-year-old Storm (laughter).”