Sharma at 70 per cent of potential, says coach

Astra Sharma's coach Geoff Macdonald believes the West Australian rising star could develop her game even further to have a long and successful pro career. 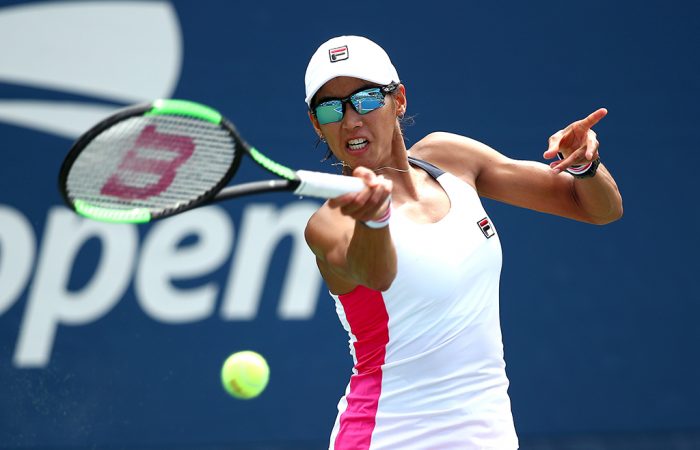 Following a breakthrough season highlighted by her top-100 debut, Astra Sharma is poised for even bigger and better things.

That is the belief of Sharma’s coach Geoff Macdonald, who was glowing in his praise of the 24-year-old West Australian towards the end of her 2019 season.

Speaking on a recent edition of Sports Illustrated’s Beyond The Baseline podcast, Macdonald said Sharma had scope for further improvement as she continued to play more regularly on the WTA tour.

"Her physicality is huge. Even when she was a teenage athlete in our academies, her testing results – things like vertical leap, speed and overall conditioning – were the highest we’ve ever recorded for females."
– @prattstar22 on @astrasharma https://t.co/UMjE9jfABa

“I think she’s at about 70 per cent of her potential. There’s a lot more that she could develop, that could make her have a really good, long career,” he said.

“My job is to say: how do I help her, and what does she need to do, to get better? She’s thinking about that all the time, which for tennis coach is quite a healthy thing to do.”

This season marked Sharma’s first full year on tour after she graduated from Vanderbilt University — where Macdonald is the head coach of the women’s tennis team — in 2018.

Sharma began 2019 ranked No.231 yet surged after a stunning first half of the year.

During that time she qualified for the Australian Open and won through to the second round, as well as making the mixed doubles final with John-Patrick Smith. In April, she qualified for Charleston then reached her first WTA final in Bogota — and won her first WTA doubles title at the same event with Zoe Hives — before peaking at world No.85 in June.

Watched @astrasharma during her singles campaign and again tonight , she is the best female natural athlete I’ve ever seen come out of Australia @TennisAustralia .

Her vastly-improved ranking saw her directly qualify for the main draw at the French Open, Wimbledon and the US Open, while she also debuted in Australia’s Fed Cup team.

Macdonald, who spent time travelling on the circuit with Sharma in 2019 when not coaching at Vanderbilt, pointed to Sharma’s well-rounded approach to her career as a driving force behind her success.

“She had a lot of interests. She was taking a course online, she was playing guitar, she’s reading novels. She was talking to her friends from Vanderbilt,” he said.

“We talk about how college can be the perfect developmental stepping stone to the pros, and again, if it doesn’t work out, you have a good degree.

“She came to us in 2013. An email came over from Tennis Australia, (from) a coach there. I just reached out and connected with her, and we began talking.

Astra Sharma's singles career has come to a close as a Vanderbilt Commodore… it was everything we hoped for and so so much more. Thank you, Roo! #FIGHTDORES pic.twitter.com/JfTX4ixXjb

“(Meanwhile) an engineering professor (from our university) was going to Melbourne for a conference — and it coincided with the Australian juniors. She saw Astra and she said she’s probably the best athlete I’ve seen on court, she’s incredibly respectful and a good kid, but she’s not that good yet.

“I’ve never had an athlete come in and steadily work at something the way (Astra) did. And once I saw what she did her second year at Vanderbilt, I knew she could play pro.”