Ash Barty's former doubles partner CoCo Vandeweghe has tipped her hat to the Australian and her impressive achievements in 2019. 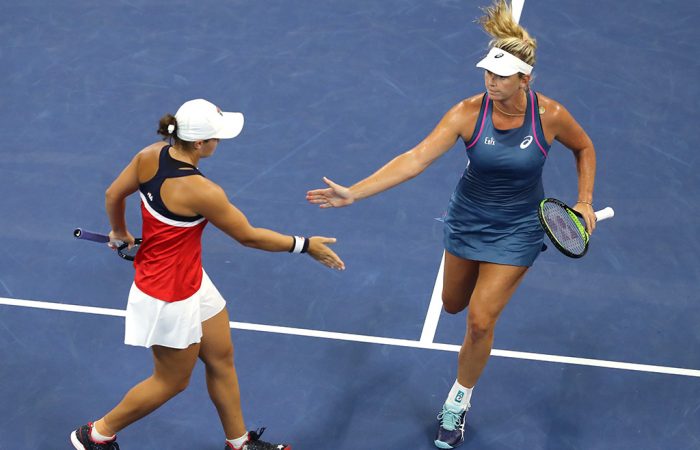 CoCo Vandeweghe has watched with admiration as Australia’s Ash Barty has ascended to the top of the women’s game in 2019.

The American, a former top-10 singles player who won the US Open doubles title with Barty in 2018, was sidelined for the first seven months of the season with a severe nerve condition associated with an initial foot injury.

Vandeweghe she and Barty had engaged in plenty of banter via text while Vandeweghe was out of the game.

“When she won the French Open, I told her: you remember, the year before, when were both counting down the weeks until grass-court season? Yeah, I think you’re going to be counting away from the weeks of grass-court season now,” she laughed when chatting with tennis.com.au.

“It’s been fantastic (what she’s done). When we started playing doubles, she always called me ‘big dog’ and things like that, (but) it was very much flipped the opposite when we were playing doubles.

“Granted, she’s worked hard and she has achieved all these great things.”

Vandeweghe said she was open to the idea of “rekindling the fire” with Barty in doubles — the duo also won the Miami Open together in 2018 — but that she would play sporadically, wanting instead to focus on building up her singles ranking, which has fallen to No.241.

“Maybe I’ll use her clay-court fire to make her enter the French doubles (with me),” she laughed.

Barty, meanwhile, won’t be ditching doubles in pursuit of individual honours in 2020.

The 23-year-old will carry a “if it ain’t broke, don’t fix it” approach into the summer of tennis as she promises to lay it all on the line in her quest for Australian Open glory.

And that includes playing doubles with her best friends on tour.

As if being Australia’s first women’s top seed at the Open in 43 years isn’t big enough, Barty will also arrive in Melbourne bidding to become the first world No.1 to hoist the trophy since the great Serena Williams in 2015.

Such is the depth in women’s tennis that Simona Halep at the 2018 French Open is the only other top seed apart from Williams in the past 20 major tournaments to claim the title.

Australian fans will be hoping the hugely popular Barty can end a 41-year Australian Open title drought for local players.

“There shouldn’t be any assumptions,” Barty said.

“There are no certainties in sport and I think that’s the beauty of sport – anyone can be beaten on any given day and it’s about preparing and doing the best you can do on that day.

“I can’t wait to play in front of the Aussie crowd again and go out there and give it my all. Regardless of whether I win or I lose, I think the Aussie public love the fact when Aussie players come out and just give it a crack.

“That’s what I can promise. I will go out there and give it my best and whatever happens, happens.”

After trading her tennis racquet for a well-deserved golfing holidaying with her boyfriend in Queensland, Barty is well into into her pre-season.

She will launch her summer campaign at the Brisbane International and coach Craig Tyzzer says Team Barty won’t be straying far from their tried-and-tested formula to get the world No.1 peaking for the Open starting on 20 January.

“We’re not looking at doing anything different. Obviously what we did last year was pretty successful so we’re going to stick to similar things,” Tyzzer said.

“We’re a couple of weeks in now into training and it’s probably more than what we did this time last year.

“It’s just to get a fair bit of volume in early. She’s doing a lot of physical strength training and we’ll be looking, by the time we get to the tournaments, at getting more match play and speed work and hopefully feeling ready to play during that four-week period in Australia.”