Sekulic, McCabe progress at 16/u championships

Philip Sekulic and James McCabe were among the seeded winners on Day 1 of the 16/u Australian Championships, held at Melbourne Park alongside the 12/u event. 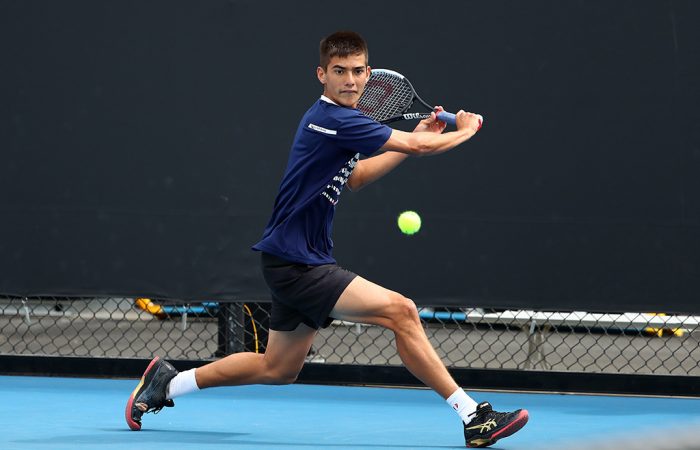 Philip Sekulic and James McCabe won through to the second round as the 16/u Australian Championships kicked off at Melbourne Park on Wednesday.

Both McCabe and Sekulic competed at last week’s 18/u championships, coming through the group stages before being knocked out in the quarterfinals.

McCabe said that competing in the older age group helped him when beginning his 16/u campaign this week.

“You get to play the top 18-year-olds in the country, so it’s a really good experience,” he told tennis.com.au.

“The 18s was great, and after I lost in the quarters I went back home, trained for a bit, worked on the things I needed to work on, came back here now, and I’m hoping to win.

“It definitely gives you a lot more confidence (when coming back to the 16s) because you can see the difference between the 16s and the 18s, and how much harder the 18s are hitting than the 16s.”

McCabe was pushed in a tighter second set by Camus before ultimately prevailing 6-2 6-4.

He next faces qualifier Doni Gashi for a place in the quarterfinals.

“I didn’t know what to expect — I just knew he (Camus) was a left-hander. To be honest, I just expected him to make a lot of balls, which he did, but he was hitting pretty big for a 13-year-old,” McCabe said.

“It was a good match. First set, my serve was really on, and then just came off a bit in the second — I think that was focus.

“But I know what I need to do in the second match, I’ve watched my opponent, so I’m ready.”

In the girls’ 16/u event, No.1 seed Talia Gibson stormed into the second round with a 6-1 6-2 victory over Martine Carroll.

She was joined in the last 16 by second seed Meeka Marshall, who beat Maliyah Vili 6-1 6-4.

The 12/u Australian Championships also continued at Melbourne Park, with top seed Gautham Santhosh beating qualifier Cruz Hewitt to advance to the third round.

Second seed Jamie Mackenzie also progressed, while in the girls’ tournament, No.1 seed Alana Subasic led 12 seeds through to the third round thanks to her 6-2 6-3 win over Charlotte Vanstone McGrath.