Lawless, Kempenaers-Pocz into 18/u semifinals

Taylah Lawless and Charlotte Kempenaers-Pocz power through to the 18/u Australian semifinals, where they are joined by Annerly Poulos and Natasha Russell. 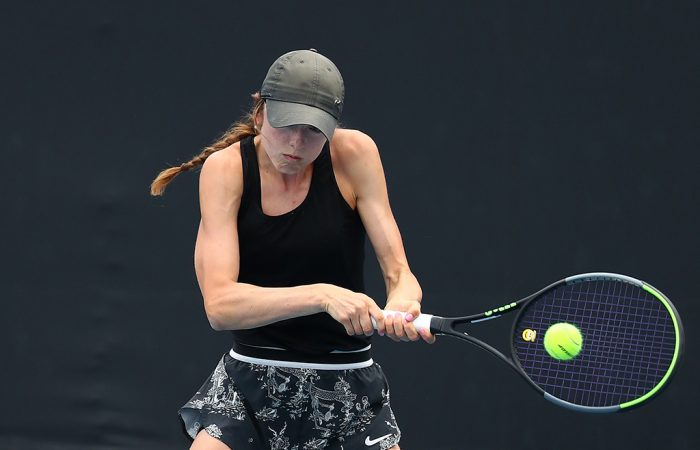 For the second straight year, Taylah Lawless advanced to the semifinals of the 18/u Australian Championships at Melbourne Park.

The 16-year-old from New South Wales overpowered Amy Stevens 6-2 6-1 on Thursday, continuing an excellent week at the December Showdown.

Lawless went undefeated in the group stage — without dropping a set — and extended her winning streak to four matches and eight sets with victory over Stevens.

“Today, everything went well for me. I know Amy’s been struggling with an injury this week, so that unfortunate for her,” she told tennis.com.au.

“But I felt like I was able to capitalise on that. Came out with a really clear game plan and I was happy that I could execute that.

“I absolutely love this tournament — it’s one of my favourite tournaments to play in the whole year. I really love getting out here and I feel really good when I’m out on these courts with the ballkids and the umpires.

Next up Lawless plays Natasha Russell, a 6-3 6-4 winner over qualifier Jasmine Adams.

Later on Thursday, Charlotte Kempenaers-Pocz, a finalist at last year’s 14/u event, stormed into the semifinals with a 6-3 6-4 victory over wildcard Lara Walker.

“It feels really great, it makes me feel like I’ve improved a lot which is good,” said the South Australian of her performance in a higher age-group.

“I think it was a great match; both me and Lara played pretty solid. I think we won a lot of our serves, so it always up and down when we were returning. So yeah, it was pretty good.”

In the boys’ event, top seed Tristan Schoolkate continued his smooth progress with a 6-3 6-1 quarterfinal win over qualifier Sam Edgar.

Schoolkate, who has dropped just one set in four wins this week at Melbourne Park, next tackles Alex Bulte, who required three sets to stop James McCabe.

In the most tightly-contested match of the day, No.2 seed Dane Sweeny overcame Stefan Storch 3-6 7-6(5) 7-5 to set up a semifinal against Tai Sach, who defeated Philip Sekulic 6-3 6-4.