After two solid victories in Madrid, Australia has set up a Davis Cup quarterfinal against Canada -- yet both sides carry injury concerns into the blockbuster clash. 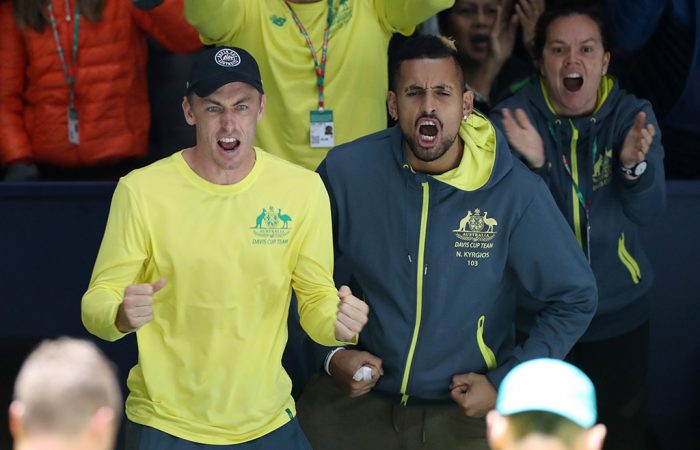 Australian captain Lleyton Hewitt admits he’s not sure what Canadian team his Davis Cup side will face in Friday’s quarterfinal in Madrid.

Australia topped Group D after beating Belgium 2-1 on Wednesday evening, a day after beating Colombia 3-0; as a result, the team joined Canada and Spain in the knockout quarterfinal stage.

Canada has been rocked by injuries, first to Milos Raonic on the eve of the tournament and later to teenage sensation Felix Auger Aliassime, who suffered an ankle issue ahead of his team’s opening match against Italy.

The 19-year-old did not play in either of the Group F matches; instead Vasek Pospisil and 15th-ranked Denis Shapovalov carried the load against Italy and the USA.

The exhausted pair caused controversy by conceding their dead doubles rubber against the Americans – handing the USA a 6-0 6-0 win.

Mystery surrounds the fitness of Auger-Aliassime and Hewitt admits he is wary of the the 14th-ranked side.

“Pospisil obviously stood up and played extremely well in his first two matches here. So you’re probably assuming that they’re going to put him in. He’s done everything right so far. And then Denis has played quality matches in both his singles as well,” Hewitt said.

“Both of those played really good doubles. So whether Felix fits into that or not, that team tomorrow night, I’m not sure.

“All I can control is obviously our boys and getting them prepared as well as possible and working out game plans for them to hopefully go out and execute and give ourselves the best chance.

“But we’re certainly not taking anything for granted. It’s going to be a really tough three matches.”

Australia showed strong form in the group stages, with Nick Kyrgios and Alex de Minaur winning both of their singles matches – first against Colombia, then Belgium — to give the green-and-gold unassailable 2-0 leads prior to the doubles rubbers in both ties.

Yet Australia’s progression to the quarterfinals has been tempered by an injury to doubles specialist John Peers.

Peers and Jordan Thompson’s doubles rubber against Belgium late on Wednesday night local time was abandoned after just one game.

After taking a 1-0 lead against Sander Gille and Joran Vliegen, Peers appeared in discomfort and after approaching Hewitt, who was keen to take no chances, Belgium were awarded the win.

“Peersy just was feeling his elbow a little bit and, for me, it was an easy decision because I’m not risking him before we have a quarterfinal match tomorrow,” Hewitt said.

“He’ll be getting treatment tonight and icing it. Hopefully it pulls up well for tomorrow night.”

The Aussies withdraw from the doubles rubber due to an injury concern for John Peers.

Peers, who is one of the top doubles players in the world, admitted he was worried by the issue but hopeful he can to be fit to face Canada.

“I am a little bit (worried) but I’ll rest up, try and get as much work into it as I can tonight and see if we can get up for tomorrow,” Peers said.

The tie against Canada takes place on Thursday (Friday 4am AEDT) on centre court at the Caja Magica in what will be Australia’s third successive late-night finish.

Hewitt said the scheduling has been far from ideal and, with Canada having an extra day’s rest, his team has it all to do against a talented side.

“There’s not a lot we can do, really. We just got to do the same as last night. The boys just have to do all the right things – food, treatment, get enough sleep as well,” Hewitt said.

“At least they’re on a night schedule, they should be used to it.”

De Minaur reinforced his reputation as one of the most exciting young players in world tennis with a commanding performance against world No.11 David Goffin.

The 20-year-old Sydneysider, who held a match point at 6-0 5-3, eventually prevailed 6-0 7-6(4) to seal Australia’s first victory over Belgium since 1991 and avenge the World Group semifinal defeat in Brussels two years ago.

"(That's) #DavisCup emotions for you. Everything just means so much greater when you're playing for your country. I'm happy that I was able to win for Australia. A win is a win however you may do it. I did it the hard way today and I'm very happy."@alexdeminaur #GoAussies pic.twitter.com/bxZGEpRtWu

In the opening match of the tie, Kyrgios saw off the gutsy Steve Darcis 6-2 7-6(8) in a thrilling encounter.

Once again Kyrgios held his serve throughout, hurling down 22 aces – including an incredible nine of his final 10 deliveries to win the match.

“We all wanted to go out there today and bring the energy,” Kyrgios said.

“But I’m just happy we got through. I don’t really care about my serving stats or anything. I just wanted to get the win.”