After a two-year singles hiatus, Storm Sanders is rewarded with the Playford title in just her second tournament back. 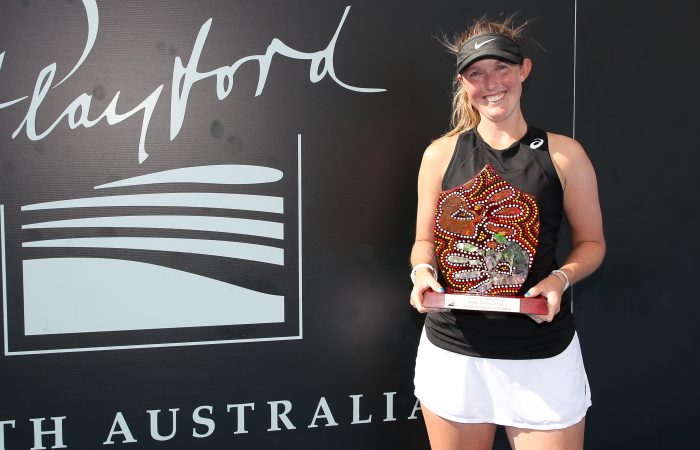 Storm Sanders turned the tables on Lizette Cabrera, winning the City of Playford International II on Sunday with a straight sets victory.

The West Australian wildcard – competing in just her second professional singles event in two years – showed her class to overcome the third seed 6-3 6-4, reversing the result of their quarterfinal encounter in Bendigo last week.

“I was going out for revenge but at the same time, I have no pressure on myself, so I was telling myself I was playing in the final and I was really just excited to be out there and enjoying myself,” Sanders, 25, said. “I played a really solid match, I was just staying aggressive and taking my chances.”

Sanders, a former world No.202 whose last title came in Launceston back in 2013, never thought the next was within her grasp so soon after returning.

“It’s pretty crazy,” she said. “I still can’t really believe it, but it’s good to know my level is there and I’m playing consistent matches.”

During her singles hiatus, Sanders has continued to perform well on the doubles court, currently ranked world No.120. On Saturday, she partnered American Asia Muhammad to perfect her week in Playford, claiming the women’s doubles title after the top seeds defeated Brit Naiktha Bains and Tereza Mihalikova of Slovakia.