Jayne Hrdlicka: Eye on the ball

A mother, a high-profile CEO and the first woman to hold the position of Tennis Australia Chair, Jayne Hrdlicka told Australian Tennis Magazine how her ability to successfully combine many important roles is helped by skills she developed on a tennis court. 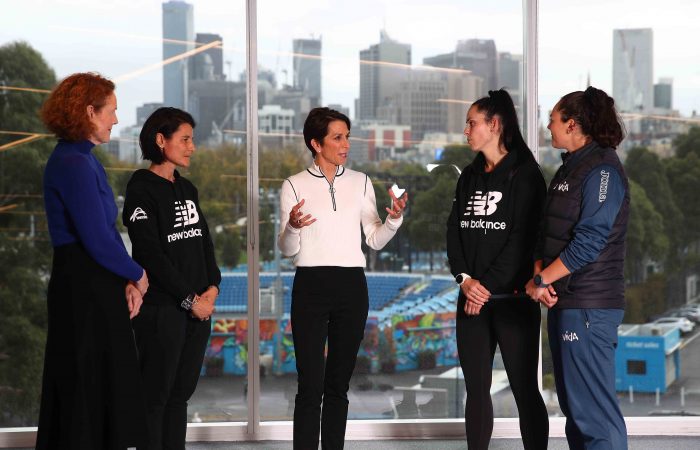 Few people are as knowledgeable – or as passionate – about the positives of tennis participation as Jayne Hrdlicka. In a lifetime of spending as much time on court as possible, the Tennis Australia Chair has not only gained a first-hand understanding of the game’s physical and mental benefits, but especially come to appreciate its value for women.

“Tennis is a great sport for everyone to participate in,” Hrdlicka tells Australian Tennis Magazine. “But the thing I probably most love about tennis, and particularly for women, is the mental toughness that it helps build.

“When you’re playing tennis, especially learning how to play tennis from an early age, it teaches you how to back yourself in tough situations. I think that’s a fabulous life skill and for girls in particular, learning how to have that confidence early to take that with them in everything they do in life is just invaluable.”

For Hrdlicka, that important development first occurred in Kansas, United States, where she was raised. Since emigrating to Australia in 1994, Hrdlicka’s love for the sport has only grown – and so too has the many ways in which the skills she learned on court support her busy life.

The former CEO of Jetstar Group and Qantas Group’s Loyalty program, Hrdlicka is now the CEO of The a2 Milk Company, where she often calls on the focus that’s also so critical on a tennis court.

“In order to compete effectively, we’ve got to stay focused, you’ve to keep your eye on the ball,” explains Hrdlicka, also a mother to two sons, age 12 and 14, who are each passionate tennis players.

Those skills are also benefiting tennis, Hrdlicka now two years into her leadership position at Tennis Australia, which followed her appointment as a Director in 2016. The first woman to have held the role of Chair in the company’s history, Hrdlicka is proud to demonstrate qualities that she considers as critical to her position.

It’s an outlook enhanced by a strong working relationship with Craig Tiley, Tennis Australia CEO and also a founding member of the Male Champions of Change group, in which influential leaders advocate for equality.

“It’s really great for people to see the role modelling from the top of the sport and that’s Craig and myself in passionately believing that diversity of thought is critical in making good decisions as an organisation – whatever your organisation is,” Hrdlicka continues.

“You need to have men and women in representative balance and you need to have people with a variety of different skills and backgrounds represented – because those different vantage points open up new ideas and different ways of thinking about the same challenge or the same opportunity and you make better decisions as a consequence.

“So I think it’s great and I think it’s a very healthy thing for our sport to have a man and a woman leading the sport and for both of us to have exactly the same orientation with respect to the importance and power of diversity, because it means we can make a huge difference and set our sport up well for the future.”

While that considered approach is delivering a culture for success, Hrdlicka and others within Tennis Australia are quick to identify opportunities for improvement and implement key strategies. An imbalance between the number of male and female coaches, for example, was helped by the establishment of the President’s Women in Tennis scholarships.

“We put money behind motivating and encouraging women to come into the sport in a variety of different places and getting more girls on court,” explains Hrdlicka, who has been delighted to see the range of females who have benefited.

“It’s so great to hear their stories and they are all different which is what makes it, I think, quite powerful. Because we’re looking to help a broad cross-section of women and they’ve each got a mix of different challenges that have held them back.

“I set up a scholarship to give them access to experiences and education and opportunity that they otherwise might not have had, and it’s built in them the confidence to really give it a go. It encourages them to really push themselves.”

Meanwhile, the hard work continues to not only engage more players, but also ensure the interest of participants continues.

“I think we’re relatively early days in the way we want to bring the sport to life,” says Hrdlicka.

“We’ve got unbelievably strong foundations in Australia with the sport of tennis and it’s an obligation we all share and a huge responsibility we all share to make sure that we continue to go from strength to strength. It’s a much more competitive world today for people’s leisure time. There are lots of things you can do, including just sitting on a chair and entertaining yourself with your phone – so we’ve got to
work harder at it, and we’ve got to be different in the way we engage people to play the sport.

“I think it’s very exciting and I think we’ve made a lot of progress. We’re building on strong foundations and the opportunities yet are quite significant.”

“I had absolutely nothing to do with it of course but it still filled me with a huge sense of pride, you know, in all that she’s achieved and the way she’s achieved it,” Hrdlicka enthuses.

“She’s extraordinarily humble and incredibly kind and she never gives up and ensures she’s living by her values … she has done a remarkable job setting a great example for all people everywhere in how to step up and be the best of yourself.”

The positivity grows as the Australian Fed Cup team prepares to challenge France in the 2019 Fed Cup final.

“It’s a great thing for tennis that it inspires young players coming up, especially young women coming up. How much opportunity there is,” Hrdlicka relates.

Getting the balance right

Jayne Hrdlicka is the first woman in Tennis Australia’s history to hold the position of president and chair. This International Women’s Day, she explores what the theme #BetterforBalance means to her. #IWD2019 @womensday https://t.co/T3y9SzLZwG

In many ways, it’s also reflective of overall progress at Tennis Australia. For Hrdlicka, an enormous source of pride is how the growing national body is working collectively.

“The thing that I’m most proud of is how well we’re working as one team. As a sport, we’ve got lots of different organisations that feed into the fabric of our sport and the way we all work together is essential for delivering great experiences playing tennis for the people of Australia,” she explains.

“One of the most important things for me is making sure that we as Tennis Australia work really hard to be the glue that creates a one team culture across the sport and brings everybody together in a more connected collaborative way aligned around a common objective, which is getting more people to play tennis more often.”

Nobody loves to do that more than Hrdlicka, who plays tennis daily in holiday periods and is rewarded each time her busy professional schedule allows time to spend on a court.

“I’m happiest when I’m out with the family playing tennis and or helping both my boys play a lot of tennis and play competitively,” she relates.

“Whether I’m playing or whether I’m watching my sons play or watching their friends play. My happy environment is being around a tennis court.”

This article originally appeared in the October-November edition of Australian Tennis Magazine.