Ash Barty will have Naomi Osaka and the year-end No.1 ranking in her sights as she enters the court at the WTA Finals in Shenzhen on Tuesday night. 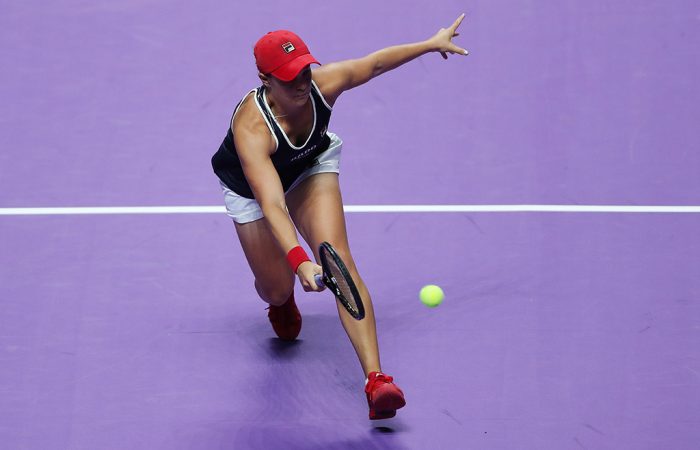 Not content with the year-end world No.1 ranking, Ash Barty is intent on booking a spot in the WTA Finals semis with a win over Naomi Osaka on Tuesday night.

Barty revealed how she’s had to repeatedly revise her career goals while exceeding all expectations during her incredible ascension to No.1.

Three years after returning to tennis following a stint playing professional cricket, Barty only needs to step on court and play one point against Osaka on Tuesday night at the WTA Finals to officially clinch the season-ending top ranking.

The 23-year-old says such a prospect was never in her wildest dreams at the start of 2019.

Only after winning the French Open in June and climbing to second in the rankings did Barty and her team begin to think she even “had a sniff” of making this week’s season-ending championships for the world’s top eight players.

Now Barty acknowledges she must raise the bar even further to hold on to top spot.

“We’ve re-set goals during different times of this year after we’ve hit a few of our other ones so I think it’s always nice to keep pushing yourself and refresh your goals and do the best you can to try to bring in that next level,” she told AAP in Shenzhen.

“But it’s been a great year and I’m hoping to finish really well in these next two weeks. In the back of my mind, there’s a Fed Cup final that I’m really looking forward to, too.”

Barty’s coach Craig Tyzzer hailed his charge’s new-found consistency as the most impressive part of her rise.

In addition to chalking up a tour-best 53 wins already this season, the French Open champion has lost just 13 times in the past 13 months.

“For me, the consistency level has been amazing that she’s been able to sustain it,” Tyzzer said.

“You expect some flat spots and some dips … she hasn’t had a lot at all.”

Barty, typically, isn’t content with being the first Australian woman — and non-American or European — since rankings were introduced in 1975 to finish as the year-end No.1.

After winning her opener against Belinda Bencic on Sunday, the top seed is intent on reversing a three-set loss to Osaka in this month’s China Open final to book a spot in the semifinals of 2019 season finale.

“It’s obviously a very tough one against Naomi,” Barty said.

“It’s refreshing knowing that I get to play her now having just played her a few weeks ago in Beijing. I learnt a lot from the match.

“It’s very different conditions; indoors and the bounce of the court changes that a lot.

“First and foremost it’s about going out, trying to adapt to the conditions. Go out there and try and learn as much as possible, change a few things tactically.

“It’s an opportunity for me to go out there and try a few different things.”