Barty opens with win over Bencic at WTA Finals

Ash Barty beats Belinda Bencic in three sets in her opener at the season-ending championships in China. 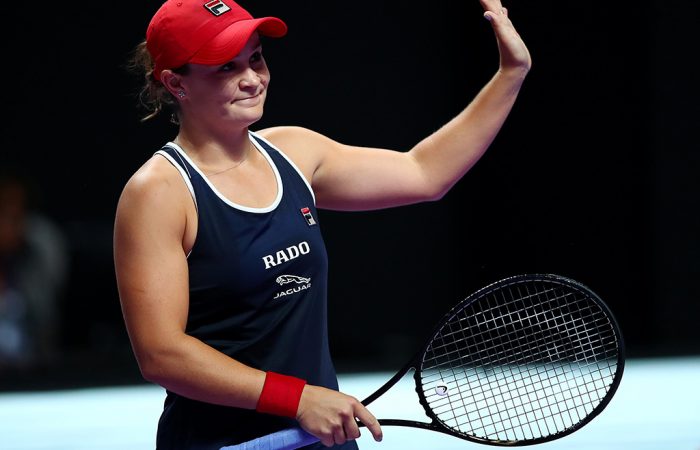 Ash Barty fought back to make a winning start to her WTA Finals debut with a three-set victory against Switzerland’s Belinda Bencic in Shenzhen, China.

“I think in particular for tonight, it was important in the first two or three games in the second set to try to reset the tone,” said Barty.

“I was able to do that with my first service game, first return game, and roll on from there.

“I prefer not to be a set down more often than not. I mean, I want to hang around. I don’t want to roll over and give my opponent an easy win.”

The season-ending event sees the world’s top eight singles players drawn into two groups of four, with the top two from each qualifying for the semifinals.

World No.1 @ashbarty breaks down her opening victory at the Shiseido @WTAFinals Shenzhen!

Barty all but secured the year-end world No.1 ranking with a steely comeback victory in her opening match.

Unless disaster strikes and she can’t walk on court again this week, and Karolina Pliskova takes the title, Barty’s gritty win sealed the 23-year-old’s place in tennis history.

The French Open champion will be the first Australian woman to finish a season in top spot since rankings were introduced in 1973.

It’s a feat that not even Grand Slam legends Margaret Court or Evonne Goolagong Cawley ever managed.

“It’s pretty neat. It’s been an incredible year, it really has,” Barty said.

“I think it’s a bit of a bonus to be able to finish year-end world No.1. It certainly wasn’t something that was in my realm at the start of the year. It’s really exciting.”

Former Wimbledon and US Open champion Lleyton Hewitt, in 2001 and 2002, is the only other Australian to have held top spot at the end of a calendar year.

The honour is a fitting reward for a phenomenal season of firsts for Barty, highlighted by her stunning triumph in Paris in June during a life-changing 15-match winning streak in Europe.

But her tour-topping 53rd win of the year on Sunday night also leaves Barty on track to qualify for the semifinals at the season-ending showpiece, and the chance to crown her triumphant 2019 campaign in ultimate fashion.

Australia’s spearhead also has the Fed Cup final against France in a fortnight to worry about, so the Barty party is on hold for now.

“First and foremost, we’d love to finish off the week here really strongly, then we can worry about celebrating that little thing,” Barty said.

“Very, very cool for myself, my team. The amount of work and effort we all put in, it does take a village.

“I have an incredible team of people around me. I think this is more for them than for me.

“But we’ve still got a job to do here and then obviously we’ve got a Fed Cup final to look forward to as well.”

The top seed can all but clinch a spot in the final four with another pool win on Tuesday against Osaka.

The champion in China will bank the biggest cheque ever offered in men’s or women’s tennis, for at least $6 million – or $6,925,000 if they win the title undefeated.

But money can’t buy the season Barty has put together.

“It’s been an incredibly consistent year across all surfaces, across all continents in the world,” said Barty, the winner of titles on clay, grass and hard courts in 2019 and now chasing one indoors.

“I feel like (I’ve) played an exceptional level of tennis.”

Fellow Aussie Sam Stosur and China’s Zhang Shuai came up just short in their opening match of the doubles event, going down 6-4 4-6 10-5 to Barbora Strycova and Hsieh Su-Wei.