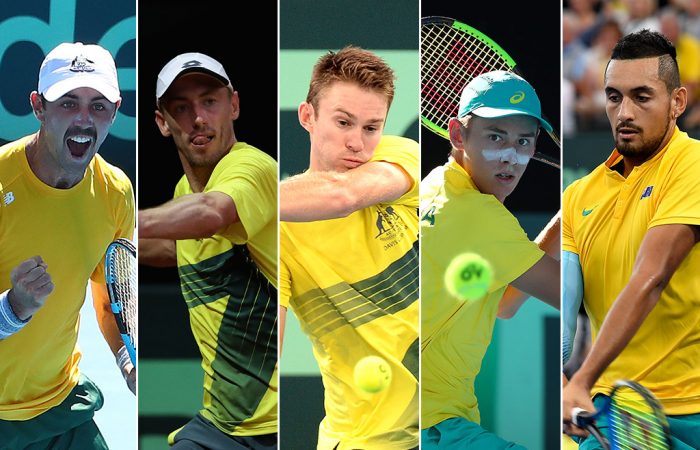 Australia will send a strong contingent to compete in the revamped Davis Cup by Rakuten Finals in Madrid from 18-24 November, with the team headed by Australia’s top-ranked male Alex de Minaur.

Standing alongside the dynamic Sydneysider in the five-man team, captained by Lleyton Hewitt, is world No.30 Nick Kyrgios (ACT), No.53 John Millman (Qld), No.55 Jordan Thompson (NSW) and doubles world No.30 John Peers (Vic).

The Finals will see 18 nations compete in a round robin best-of-three rubbers format on indoor hard courts at the Caja Magica. Australia has been drawn in Group D alongside fourth seeded Belgium and Colombia.

“We’re fielding one of the strongest Davis Cup teams in recent years,” said Hewitt, who was a member of Australia’s most recent Davis Cup victory in 2003 against Spain at Melbourne Park.

“We have so much depth in men’s tennis, it was a tough selection but I am so pleased the guys were willing to unite for their country once again.

“Alex has had an incredible year and John Millman continues to prove he can beat anyone in the world. Thommo broke into the top 50 this year and we’re lucky to have one of the best doubles players in the world in John Peers. Nick is obviously a brilliant team player, either in singles or doubles, so we have plenty of options.

“We’re definitely one of the more dangerous teams in the competition.”

A winner of three ATP titles in his breakthrough 2019 season, 20-year-old De Minaur edged closer to the top 20 after claiming the ATP 250 in Zhuhai last month, becoming Australia’s highest ranked player in the process.

Kyrgios first represented Australia in Davis Cup in 2013, and this year has won ATP 500 titles in Acapulco and Washington DC to maintain a place in the world’s top 30.

Millman, who upset Roger Federer in the 2018 US Open round of 16, has continued to thrive at the age of 30, reaching his first ATP 500 final in Tokyo as a qualifier earlier this month.

Thompson, regarded as one of the most hard-working and competitive forces on the Tour, cracked the Top 50 this year after reaching the ‘s-Hertogenbosch final in June. Five times an ATP quarterfinalist this season, he also progressed to the fourth round of the Miami Masters and third round at Roland Garros, a career-best Grand Slam result.

Peers was first selected to play Davis Cup in 2016; an Australian Open doubles champion in 2017 and a finalist this year, he teamed with Thompson in February to help deliver Australia a 4-0 victory over Bosnia & Herzegovina, a result sending the green-and-gold into the Madrid finals.

Such is the strength and depth of the Australian team — four singles players in the world’s top 60 and a Grand Slam doubles champion — that there was no room to select rising star Alexei Popyrin, who this year cracked the top 100 after a breakthrough season.

“He was obviously the next guy, right on the borderline,” Hewitt said at Melbourne Park on Tuesday.

“But we’ve got four guys inside 55 in the world — it’s hard to go past those guys right now. The experience probably that Thommo and John Millman, under Davis Cup situations, have had, I think if those boys get the call up I know I can 100 per cent count on what they’ve done in the past.

“But (in) years to come, (Alexei’s) opportunity is going to be there for sure. He’s qualified again in Basel this week, he’s playing great tennis. He’s gone from strength to strength.”

The Cup changed format in 2019 and 24 nations competed for 12 qualifying places in February, including Australia.

Four 2018 Davis Cup semifinalists and two wildcard nations round out the 18 teams heading to Madrid to battle for top honours in 2019.

Australia is second only to the US on the all-time list of Davis Cup champions, 28 times victors and 19 times runner-up.

“The boys are in great form and have played with each other on many occasions. There’s no denying the talent and team spirit we have can carry us through to the championship match,” Hewitt said.

“We’ve enjoyed great success in Davis Cup and although it was difficult to see the format change and a 100-year tradition end … we get to represent Australia. We get to wear the green and gold. We’ll go over there and do absolutely everything in our power to represent Australia well and for the public to be proud of us.

“We’re not going over there to make up numbers, that’s for sure.”

For more information about the Davis Cup Finals visit https://www.daviscupfinals.com/.