Ash Barty's memorable 2019 season now includes another coveted honour, with the Queenslander taking out 'The Don' award at the Sport Australia Hall of Fame annual awards. 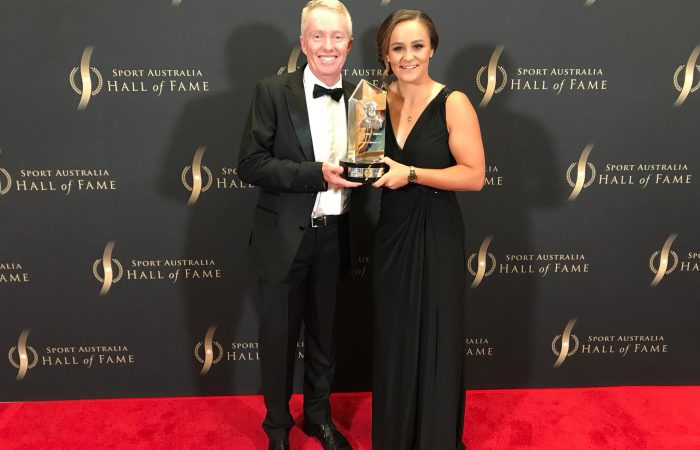 World No.1 Ash Barty made history with her honour at the Sport Australia Hall Of Fame annual awards on Thursday evening in Melbourne.

Barty became the first female tennis player to win The Don, presented annually to the sportsperson whose deeds most inspired the nation.

The Queenslander has enjoyed a breakthrough year, winning the French Open and reaching the top ranking for the first time.

She is on track to become the first Australian woman to end a season at world No.1 – a feat no Australian has achieved since Lleyton Hewitt in 2002.

“I can’t quite believe it to be honest,” Barty said of winning The Don.

“When I look at my fellow nominees this year and people who have won the award before, I feel honoured to be a part of such an inspiring and talented group of Australians.

“It’s been an incredible year, I’m extremely humbled to be here tonight with so many legends of Australian sport. I feel very, very lucky to be such a small part of it.”

Thank you Sir Donald Bradman for inspiring a nation and teaching what the true meaning of sport is.
I’m so grateful and incredibly humbled to win The Don award and to share a room with so many Australian Sporting Greats ✨ #SAHOF pic.twitter.com/VxYgt15l82

Pat Rafter is the only other tennis player to have won the The Don, in 2001.

With her triumph at Roland Garros, Barty was the first Australian to win a Grand Slam singles title in eight years, after Sam Stosur’s US Open triumph in 2011.

Barty wants to have a big finish to the year, with the WTA Finals at the end of October in Shenzhen, China – where a strong performance would solidify her top ranking – preceding her return to Australia for the November 9-10 Fed Cup final against France in Perth.

The lessons Barty learned while playing cricket keep paying off for the world No.1.

Her outstanding year, highlighted by the French Open title among three trophies, a rise to world No.1, an undefeated record in Fed Cup and her first appearance in the Australian Open quarterfinals, was unthinkable in the summer of 2015-16, when Barty was struggling with tennis and famously had switched to cricket.

She played for Brisbane Heat in the first WBBL season.

After accepting The Don award on Thursday night, Barty said the lessons she learned during her brief stint as a cricketer far outweighed any on-field performances.

Barty made lifelong friends and realised the importance of surrounding herself with a strong team.

“It was a time to find myself as a person and as a pretty ordinary cricketer. Tennis is definitely my calling,” she said.

“I made friends for a lifetime, an incredible group of friends outside of tennis, which is really nice, who couldn’t have cared whether I could hit a tennis ball or not.

“It was just really nice to be around quality people and I promised myself when I came back into the sport that I’d surround myself with only the best. That’s what I’ve been able to do.”

Chief among her tennis crew is coach Craig Tyzzer. She publicly thanked Tyzzer’s wife Sue for letting Barty take away her husband and, as she put it, borrowing him.

“He stuck with me from day dot when I came back (to tennis),” Barty said.

“I’m eternally grateful to Tyz for giving me that opportunity and that chance again.”

Barty said her achievements in the last 12 months had come as a surprise.

“It’s been incredibly bizarre … it’s been very unexpected,” she said. “The beauty about it, the best part about it, is I don’t have one regret.

“The year we’ve had has been extremely special, for myself and for my team.”