As Ash Barty inspires more and more girls to take to the court, the world No.1 has a powerful message: by simply participating, they’ve already won. 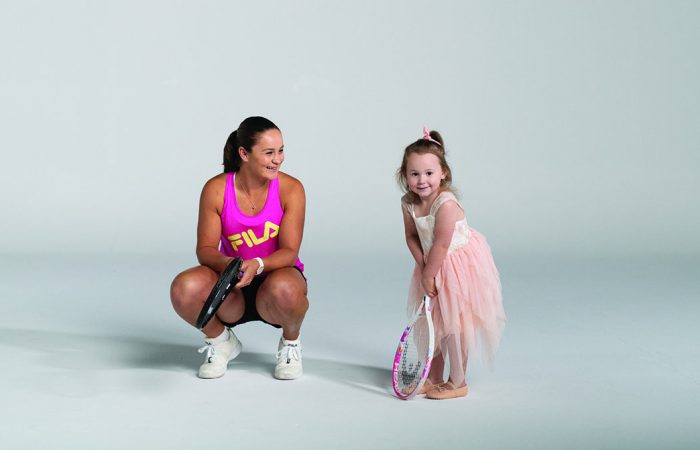 In a year in which Ash Barty claimed a first Grand Slam singles title at Roland Garros and enamoured a sports-mad Australian public – and the wider world – with her endlessly positive outlook, the only thing that’s climbed faster than her rise to No.1 is her popularity.

But while the adoration of fans, peers and the media soars, Barty remains as down to earth as ever – in fact, she still easily recalls when she was overwhelmed to meet her own tennis hero.

“I think my first starstruck moment was when I met Evonne for the very first time,” smiles Barty of her long-time idol, Evonne Goolagong Cawley.

So when a group of teenage girls meet Barty in Brisbane, there’s a special understanding from the Queenslander, who has briefly returned home after completing the 2019 Grand Slam season at the US Open, where her fourth-round singles appearance made her the only WTA player to reach the second week of every major this year.

As her three-year-old niece Lucy watches on, Barty laughs easily among a group who can’t help but appreciate the many qualities that have propelled the 23-year-old so impressively this season. Discipline, determination, work ethic, team spirit, humility and gratitude have all featured in Barty’s three 2019 singles titles, including the milestone Roland Garros victory that helped her rise to world No.1. The most obvious quality in today’s meeting, though, is empathy.

Barty posseses a first-hand appreciation that for all the relaxed fun unfolding in today’s photo shoot, there are also many challenges for young women to navigate.

Despite the passion and natural ability that became clear as soon as she first experienced tennis as a four-year-old – when a young Barty would hit for hours against the wall of the garage at her family home in Ipswich – the world No.1 knows the barriers to participate all too well.

“It’s hard for me to say what I think barriers are for everyone else, but I know that for me personally some of my barriers were that I didn’t feel like I fit in. Both of my sisters went down an academic route and I felt like I was kind of the odd one out a little bit,” Barty recalls.

Even after experiencing Grand Slam success by claiming junior Wimbledon as a 15-year-old, there were obstacles to her current success.

Barty’s two-year break from the sport is well documented, the then teenager taking time out from the tennis tour – which can be as demanding as it is isolating – in 2014.

She’s unsurprised then, by a Sport Australia AusPlay study that shows one in three girls will have stopped participating in sport by age 18.

“It was incredible for me to learn new life lessons, but it’s certainly something that I think all girls need to understand and realise – that the options are open. There are other things you can do, but the sporting lifestyle is incredible.”

It was through forging her own journey that Barty not only rediscovered her passion for the game, but also became such an accessible role model to other young women at every level of sport.

“I think you need to have choices and understand that none of them are right or wrong,” she stresses. “And I think the thing is you get to make your own decisions. You can pave your own path, create your own story and really go after it.”

Barty’s story, of course, is more impressive than most, the popular Queenslander only the second Australian woman – alongside her idol, Goolagong Cawley – to hold the world No.1 singles ranking, and only the 27th player overall since the introduction of WTA rankings in 1974.

Which is not the say that she is immune to ongoing challenges in the sport.

Long told that she was too short to play tennis, the 166cm Barty laughs: “I’m still told I’m too short! I’m put in the shorty category but you know, it doesn’t matter what size you come in – go after it, chase your dreams and show the world what you can do.”

And should Barty’s self-talk prove especially unhelpful – “it’s a battle every day; there are obviously doubts,” she admits – there is a close support network to counter those thoughts. On tour, Barty is supported by her long-time coach Craig Tyzzer, other critical advisors including her mentor Ben Crowe and manager Nikki Craig.

“It’s incredible now that I have a team of people around me that have helped me through (those doubts), that encouraged me. And (you) try and bring that positivity every single day because that’s what drives you to be your best.”

Never happier than when she’s at home in Ipswich, Barty equally values the time spent with her boyfriend Garry Kissick and is especially grateful for the support of her family, including parents Robert and Josie, plus her older sisters Sara and Ali.

“My sisters never criticise,” says Barty, the youngest of three daughters, when asked about the influence of her siblings. “They’re my biggest fans, my biggest support and I know that I can go to them with absolutely anything and they’ll have my back.

“I absolutely love them to death.”

Barty is delighted to pass on those positives, time spent with niece Lucy and her nephew Oscar among her most rewarding experiences when she is not on tour. There’ll be sage advice should Lucy choose to follow Aunty Ash’s path as a professional athlete.

“Chase your dreams,” says Barty of the guidance she’d provide to Lucy should that possibility eventuate.

“Chase your dreams and have fun. Don’t let anyone tell you what you can and can’t do. Go after (it) and put your put your hopes and dreams out into the universe, work hard and see what happens.”

Certainly that’s worked out superbly for Barty, who could never have imagined that a Grand Slam breakthrough would occur on her least favourite surface on the clay courts of Roland Garros.

“I still don’t think clay is my absolute favourite,” she laughs now.

“I love playing on grass, on hard court, but I have some really, really special memories now from a clay court season.”

And with gratitude comes other important developments for Barty, who is delighted to front a Tennis Australia campaign to encourage more young women to experience the game.

“Sport has changed me as a person for the better. I’ve definitely grown and developed as a human being, learning from experiences in sport, both the good and the bad,” Barty enthuses.

“The tough times and the best times have all come from my sporting life and my sporting career and I think having been a part of sport and growing up with sport since I was really young, it’s just been a way of life for me.”

That way of life continues to draw many admirers, none bigger than Barty’s own inspiration in the game.

“Everybody loves her,” says Goolagong Cawley. “I have people coming up to me all the time saying ‘oh, isn’t she lovely?’, ‘oh, she speaks so well, so down to earth’. And I say, ‘yep, that’s her!’

“I just like to think of her as a friend who calls her and just supports her. I just let her know that we are with her all the way.”

It’s only fitting that from hero worship came a close personal friendship for Barty – a powerful reminder that sport provides many wins of the non-competitive kind, and that tennis especially is one that all girls can easily embrace.

This article originally appeared as an exclusive in the October-November edition of Australian Tennis Magazine.