World No.1 Ash Barty returned to Australia to go on a special Indigenous tennis trip with Evonne Goolagong Cawley in Cairns. 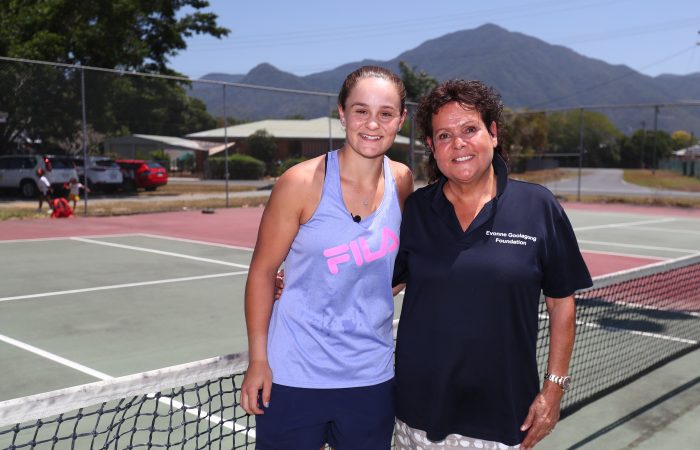 The French Open champion and Indigenous tennis ambassador returned to Australia after the China Open this week to surprise 25 Aboriginal and Torres Strait Islander tennis players alongside her friend and 14-time Grand Slam champion Goolagong Cawley.

The group of Indigenous youth participate in tennis programs year-round in Far North Queensland. Barty and Goolagong Cawley joined the players on court for a tennis lesson at Edmonton Tennis Club before heading to Bentley Park College to be part of a Wuchopperen Deadly Choices Healthy Lifestyle seminar and take part in an ANZ Tennis Hot Shots workshop with students from the school.

“This has been the most magical day, I couldn’t think of a better way to spend time within the community. To see all of these happy faces, particularly the young kids and how much they enjoy it, that’s what brings a smile to my face,” Ash Barty said.

“Getting to do things like this; an Indigenous tennis trip with Evonne Goolagong Cawley, how incredible is that? It’s been a special opportunity to bring so many people together and to talk through my tennis and my heritage.

“Being able to give back is so important to me, these are the trips I love the most,” Barty continued.

“I felt so proud when the kids were so surprised to see Ash, it put a big smile on both of our faces. I just know how much they would’ve appreciated this moment, some of them were completed stunned and didn’t know what to say, but as soon as Ash started talking to them, they felt relaxed because Ash helps put people at ease,” Evonne Goolagong Cawley said.

In 2019, the second edition of the National Indigenous Tennis Carnival took place in Darwin, Northern Territory. More than 200 players participated in the carnival and thousands of community members attended.