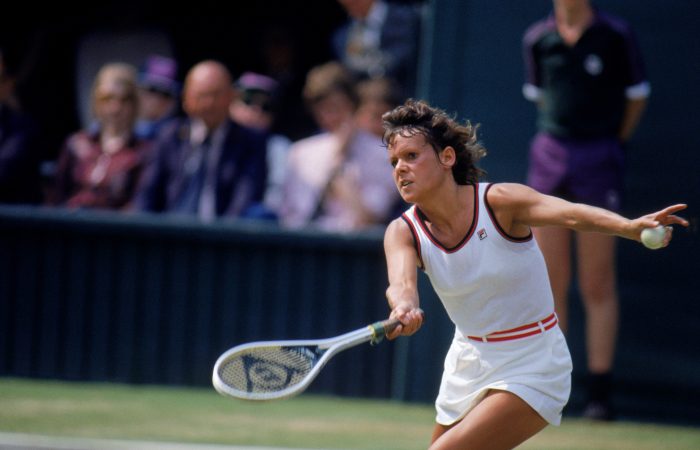 The countdown continues to the Fed Cup 2019 final, where Australia is aiming to end a 45-year title drought. Australian Tennis Magazine looks back at the career of Evonne Goolagong Cawley, the Australian No.1 when we won our most recent Fed Cup title in 1974.

Goolagong’s career began at the tail-end of the amateur era when she competed at the Australian Championships of 1967. Prior to 1971 she played just one Grand Slam tournament outside of Australia – she reached the second round of Wimbledon in 1970 – with her best result being a quarterfinal run at Australian Open 1970. Goolagong started playing tennis as a young girl in her rural home town of Balleran, New South Wales, by hitting a ball against a wall with a board from an apple crate. In 1965, her talent caught the eye of Sydney-based coach Vic Edwards and she moved to the city to develop her game and complete her schooling.

While still a teenager, Goolagong won her first two Grand Slam singles titles back-to-back at the French Open and Wimbledon of 1971. She ended that season as the world’s No.1 player, although unofficially so – WTA computer rankings were not introduced until 1975. The year 1971 was the beginning of a remarkable run of sustained success for the Australian; in a six-year span she reached 16 Grand Slam singles finals – winning five, including her first Australian Open in 1974 – and ascended to world No.1 in 1976, the year she became pregnant with her first child after marrying Roger Cawley in 1975.

It all comes down to this. Bring on the Fed Cup Final in November 🇦🇺 💚 💛 #GoAussies | @FedCup pic.twitter.com/fpGz319WX7

After a year away, Goolagong Cawley returned to tennis in late 1977 and from November that year to March 1978 she went on a tear, winning 46 of 49 matches – during that run she won Australian Open 1977, held in December – and rising to world No.3. After severely injuring her ankle at Wimbledon 1978, she would capture the title two years later at the All England Club, becoming the first mother to win the Venus Rosewater Dish since 1914. It was her last Grand Slam singles title. After that, recurring injuries and a second pregnancy meant she played sporadically during the early 1980s, before she officially retired in 1983.

Goolagong Cawley played 26 ties for Australia, amassing an impressive 35-5 win-loss record. She won 22 of the 25 singles rubbers she contested and helped Australia win three titles. “Playing for my country has always been a great thrill,” Goolagong Cawley says. “You’re not just playing for yourself but playing for a team. You’re playing for your country.” The former world No.1 still has special memories of helping Australia win the 1974 title, beating the United States 2-1 in the final. After winning her singles rubber, Goolagong Cawley combined with Janet Young to secure the title in the deciding doubles. “Janet was absolutely fantastic. We were both pretty nervous, but the adrenalin was flying high at that time,” Goolagong Cawley recalls. “We knew that we had to win that doubles for Australia and boy, it was just fantastic. We were just so excited.”

Goolagong Cawley retired having ranked in the top 10 for nine years and with seven Grand Slam singles titles from 18 finals. Her 13 major titles overall included five in women’s doubles and one in mixed. She was a part of three winning Australian Fed Cup teams – 1971, 1973 and 1974 – and won an incredible 84 career singles titles. Renowned for her grace, ethereal touch and fluid speed around the court, Goolagong Cawley was named Australian of the Year in 1971 and was inducted into the International Tennis Hall of Fame in 1988, the Women’s Sports Hall of Fame in 1989 and the Australian Tennis Hall of Fame in 1994.

Serving as Australia’s Fed Cup captain from 2002 to 2004 and as an unofficial mentor to Ash Barty, Goolagong Cawley remains passionate about getting kids involved in tennis, especially those with Indigenous backgrounds. The 68-year-old has worked tirelessly in this space, establishing the Evonne Goolagong Foundation and launching initiatives such as Indigenous Tennis ‘Come and Try’ days, national development camps and the annual National Indigenous Tennis Carnival in 2018. In 1997 she became Sports Ambassador to Aboriginal and Torres Strait Island Communities, and after being made an Officer of the Order of Australia in 1982, she was advanced to Companion of the Order of Australia in 2018 in recognition of her “eminent service to tennis as a player at the national and international level, as an ambassador, supporter and advocate for the health, education and wellbeing of young Indigenous people through participation in sport, and as a role model.”