Ash Barty goes down to Naomi Osaka in three sets in the final of the China Open on Sunday night in Beijing. 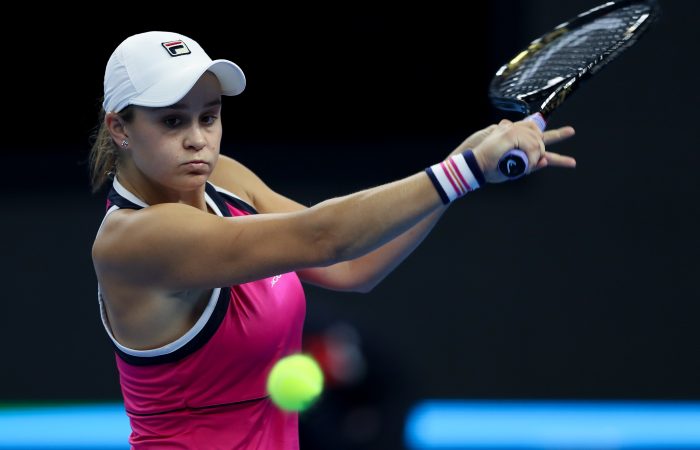 Ash Barty came within a set of the China Open title before Naomi Osaka stormed back to claim their Beijing final in three sets.

Osaka triumphed 3-6 6-3 6-2 for her third title of 2019 and her second straight, extending her winning streak to 10 matches after also capturing recent Pan Pacific Open title in Japan.

Barty was appearing in her fifth final of the year – and first in Beijing – after reaching the semifinals last week in Wuhan.

This was a battle between the reigning Australian and French Open champions, two players who have held the No.1 ranking for significant stints this season.

Yet it was Osaka’s superior power, and Barty’s tendency to commit unforced errors, which proved decisive factors.

“I think it was a decent match. It was a high-quality match. I think there were times where I was really doing the right things, and it came down to a little bit of execution,” Barty said.

“Certainly proud of the way we were able to kind of fight and hang in there right until the end in tough conditions. It’s never easy playing a pure ball-striker (like her).

“All things considered, it was a bloody good effort tonight.”

Initially it was the Australian in the driver’s seat, benefitting from Osaka’s errors in the sixth game and converting her third break point to take a 4-2 lead.

Serving for the set three games later, Barty produced a forehand winner, an unreturnable serve and a pair of aces to close it out in style.

Osaka began the second set with more intensity and began to wrest control of rallies; from 2-2 she reeled off three straight games to take a commanding position.

Trailing 15-30 when serving for the set, Osaka played consecutive inside-out backhand winners to arrive at set point, which she converted when Barty missed a return.

“I think in the second set, I probably just let her have a look at too many second serves, where she’s up in the court, has control from the first ball. That’s all that was in it,” Barty reflected.

“At times her serve was great, she hit her spots really well, took me out of it a little bit. We all know that’s a major weapon for her.

“I didn’t get a lot of help from sterile conditions, cold conditions, where I couldn’t bring in as much variety and get the ball out of her hip pocket as much as I would have liked to.”

Barty pleased with how she played given the cooler conditions. Struggled to get the ball out of Naomi’s “hip pocket”, slice wasn’t reacting the way she wanted it to and when she tried to beat Osaka for pace, forehand just wasn’t getting through the court. #ChinaOpen

Osaka held a break point to go ahead 3-0 in the final set, yet Barty saved it and later fired a forehand winner up the line to get on the board at 1-2.

Yet the seventh game is one she’d rather forget. Four consecutive errors – a backhand slice into the net, a double fault, a running forehand into the net and a backhand pushed wide – handed Osaka a service break at love.

Ahead 5-2, Osaka was now serving for the title.

Barty saved one match point on a long rally, but Osaka earned a second chance and did not let it slip.

“Overall it’s been a great week. I certainly have no regrets,” Barty said.

“Not every single week you are going to be making semis and finals. I think it’s important to celebrate those weeks, but also know still head down, bum up for a couple more weeks, another month or so towards the end of this season.